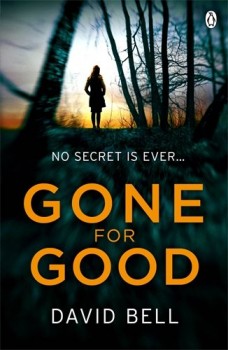 When Elizabeth’s mother is murdered and her Down’s Syndrome brother accused, her bid to clear his name uncovers dark family secrets.

David Bell has the ability to get inside his characters and make them so sympathetically and completely normal and familiar that the reader immediately identifies with – and begins to live – their problems. Cemetery Girl was one of the best and most thoughtful thrillers of last year. Gone For Good, while all that empathy still carries you through a series of unlikely twists and turns, is another matter.

Bell’s been watching too much Jerry Springer, that televised coliseum where America’s inadequates and trailer trash publicly tear themselves and their families apart. There’s surely never been a family quite like this one, Borgias and Medicis included. They are absolutely unbelievable!

Despite this and a far too obvious killer with a not too credible motive, Bell’s pared down style, clever characterisation and sheer intensity keeps this moody tale racing along. Elizabeth is a typical modern young woman, a career-oriented graduate student, unsure enough of her own personality or abilities to be able to commit totally to either family or romantic relationships.

When her orderly and organised mother, so typical of an earlier generation from small-town America and with whom Elizabeth has frequently clashed, is murdered, her Down’s Syndrome brother is suspected – and then confesses – to the killing.

Despite circumstantial evidence, Elizabeth refuses to accept the easy solution. Out of love and a conviction that he is incapable of killing, she stumblingly starts to make her own inquiries. In doing so she uncovers a trail of dark family secrets which threaten both her brother’s life and her own.

It is the cleverly crafted character of Elizabeth which carries the book. She’s an ordinary girl, unsure about herself or how to proceed, in extraordinary circumstances. As each twist of the plot throws up new problems, she gradually grows in self-confidence and assertiveness without ever being fully in control.

Bell’s taut, descriptive style makes it appear that Elizabeth is actually narrating, despite the story not being in the first person. But the parade of her thoughts, feelings, regrets, fears and hopes about the past, present and future tie the reader in.

The dialogue is believable because it is just so normal – exactly what any of us would say – and the action and pace relentless and it is this very normality which makes this a good read despite the occasional leaps of imagination.

Bell has a happy knack of keeping the reader in the middle the action. Despite the twists – and there are one or two unpleasant shocks – this is a book that is very difficult to put down.

It’s by no means a straightforward read, and reinforces his reputation of being able to get inside the lives and minds of normal people and – like Cemetery Girl – leaves you wondering what you would do and if you could cope in the same circumstances.