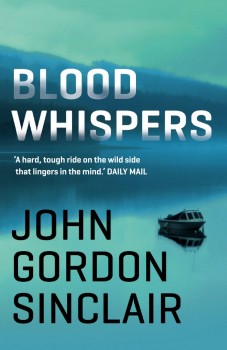 Rising criminal lawyer Keira Lynch can break a vicious Eastern European prostitution ring – if she can keep her client alive long enough to give evidence. But those behind the whoremasters will kill to protect their secret.

The multi-talented actor/author John Gordon Sinclair seems to be bidding to become the renaissance man of Tartan noir with the release of his second book. His debut, Seventy Times Seven, could be quite accurately summed up as fast and bloody. But the star of Gregory’s Girl seems to have been affected by his roles as a rent-a-Brit baddy in a series of far less memorable American films.

The fierce energy and bold use of language that drives this book cannot disguise the fact that it is basically a script for a Hollywood B movie thriller ­– confusing by its sheer pace and substituting blood for brainpower. It even has a tick-box cast: a brilliant young female criminal lawyer with a dark secret, vicious Eastern European villains, a leavening of home-grown Glasgow hoods, a caricature hit-man, corrupt officialdom, the IRA, rogue CIA men, a stereotypical Irish priest, a junkie crook with a heart of gold, a touch of the supernatural, and sordid sex. All that is needed to turn this into Jasmine Bond is a maniacal would-be world dictator and Cubby Broccoli to produce it!

Keira Lynch is a Glasgow lawyer building a reputation among the criminal fraternity as an advocate to trust. She agrees to defend a runaway hooker who knocked out and robbed an undercover CIA agent. The woman’s Serbian bosses want to silence her – and the CIA have their own dark ops interests to protect at any cost.

As bodies drop all over Glasgow – do try to keep count, I couldn’t – everybody wants Keira. She becomes a target, but no one, including her, knows whose target she is – or who, if anyone, is telling the truth.

Sinclair is a bleak writer. Sentimentality is not a word that appears in his vocabulary. Neither, in keeping with his all-action and jumpy Hollwood style, is much respect for accuracy. What professional killer puts three rounds into someone at a range of a few feet and fails to kill them? What young woman recovers from that kind of experience in a matter of weeks? What kind of police rank is abbreviated to DSI?

This is a tale about the survival of the fittest. Keira, the main protagonist is a survivor. Her character is powerful and well portrayed, even if her secret and some of her present skills are unrealistic.

Sinclair should not be dismissed as an actor trying to write. That would be unfair, because he really can and some of his descriptive passages are first class. And if you are into non-stop action and graphic portrayals of violence as a substitute for thought, you’ll enjoy this. But if, like me, you think Tartan Noir has become obsessed with writers trying to outdo each other in depravity and nastiness, you may want to give it a miss.