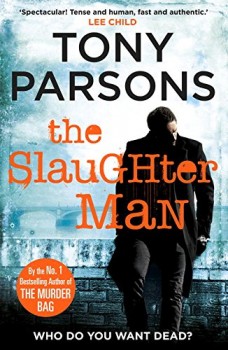 Maverick cop Max Wolfe investigates the murder of a wealthy family who were butchered with a cattle stun gun – and finds a link to another killing from 30 years previously.

I was singularly unconvinced by Tony Parsons’ crime fiction debut. Despite all the hype, he really wasn’t the favoured child coming to save our genre.

I’m pleased to report that he has dialled back on the whimsy considerably in The Slaughter Man. It still has a slightly odd, distracted air to it in places, which weakens some very powerful scenes.

It’s new year’s day in one of north London’s moneyed gated estates. A family has been butchered using a cattle stun gun – and the young son is missing. Maverick cop Max Wolfe starts digging in his favourite source, Scotland Yard’s Black Museum, and finds a link to a similar murder 30 years ago. But the killer from then is out of jail, dying and vehemently pleading his innocence. And there seems to be no link between the wealthy modern day family, and the older crime when a boy from a traveller family was stopped from marrying a farmer’s daughter.

Parsons is considerably better on portraying London than he is on his characters, where we get rather too much tell and not enough show. For example, we’re assured that Max and his DI are best chums – about the only exchange they have early in the book is a snotty one. And this matters later in the book for a very difficult reason.

The action moves from an Essex travellers’ camp to south of the river council flats, to trendy Shoreditch and the Smithfield meat market and the working class boxing club, to the posh private estates of north London. Wolfe seems to do much of his musing at night, and the city takes on a cinematic backdrop at times.

The east Lahndon scenes, particularly Wolfe’s angsting over families, seem at times to be channelling salt of the earth working class clans, hipsters with wanky beards, and even a touch of Dinsdale Piranha: “He nailed your head to the floor?” “He was a smashing bloke. He used to give his mother flowers and that. He was like a brother to me.”

The Slaughter Man is a more engaging read than The Murder Bag, although I’m not sure the police procedural aspect of it hangs together terribly convincingly at times. But it’s certainly worth a read for Parsons’ ability to create vivid mayhem and for his sweeping eye across the city landscape.