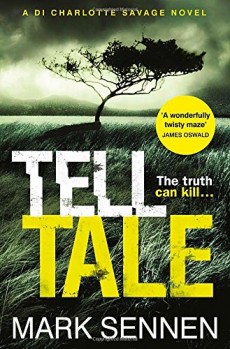 DI Charlotte Savage has vowed revenge on the man who killed her daughter in a hit-and-run accident. Meanwhile, she is also faced with a dead body on the moors and trying to track down the murdered girl’s housemate.

There are a lot of rum goings-on in Devon and Cornwall – and a lot of even rummer people populating the pages of Mark Sennen’s Tell Tale. And the police are probably the rummest of the lot.

The cops come complete with lorry-loads of baggage, and the stench of dodgy goings-on. Pay attention to the latter, as it pervades the plot.

DI Charlotte Savage is in a seriously bad place. Her daughter was killed in a hit and run in a previous book, and Charlotte has vowed revenge on the culprit – the son of the chief constable. And she has a tame gangster in her pocket to help her along. Meanwhile, there are Satanists, sheep killers, smarmy university lecturers, suspicious shopkeepers, missing eastern European women, and a local pervert on the loose. Sounds like your average south west town to me!

A Hungarian girl is found dead near a reservoir on the moors, and then her housemate goes missing. And the Agricultural Crime Squad, staffed by some fairly reluctant plods who see it as a dead-end posting, are trying to find out who is mutilating ponies.

Tell Tale canters along respectably, but it could easily take a cut of about 50 pages – and certainly either a pruning-back of characters, or some better delineation. Even by the end I wasn’t sure I’d got all the coppers straight in my head. And they were a pretty miserable bunch as well. Several of them appear to have back story that doesn’t get recapped here. In the end, the female characters, particularly DI Savage and DC Jane Calter, the acid-tongued fitness fanatic, emerge as more rounded characters.

The book is an engaging enough read, and I’d be interested to see the next in the series, but at times it’s one of those stories where you feel you might just be being asked to suspend too much disbelief. The chief constable and his dodgy contacts plotline never rang quite true. Mind you, I bet a few people will be cheering when Sennen reveals his main baddie!

Mark Sennen uses his setting well, as the action moves from remote moorland to inner city Plymouth to arty Totnes, with air and sea thrown in for good measure. And there are some vivid scenes that may have you reading through your fingers. I bet the south west tourist boards will love him!