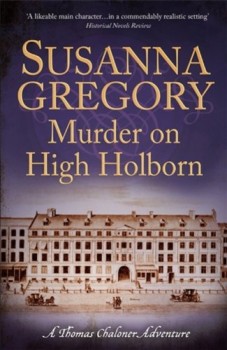 An important ship explodes and sinks as it glides serenely up the Thames, and a member of the Court of Charles II is found murdered. Thomas Chaloner, intelligencer to the Lord Chancellor, the Earl of Clarendon, is dismissed by him in order to infiltrate a group thought to be planning an uprising.

Thomas Chaloner has been sacked by his employer, the Earl of Clarendon, in order to infiltrate a group of Fifth Monarchists who, it is believed, are planning an uprising. Chaloner is given no information, so he has to start by finding out who belongs to this group and exactly what they intend to do. Despite being hampered by the secrecy of his employers, Chaloner meticulously follows up every lead and gradually discovers the truth, putting himself in danger as often as not.

Seventeenth century London is a dangerous place at the best of times and many of the people Chaloner investigates are subsequently murdered. He never knows who is working for whom. Indeed, some are in the pay of the country’s intelligence service, whilst others are out for their own gain. And what is the secret being kept by Prince Rupert?

One of the joys of this novel is the detail that is provided every now and then that brings 17th century London to life. Often this detail is about the clothes people wear: “A doublet with flared skirts for warmth, a lace shirt with breeches for elegance, sturdy boots and an oiled overcoat with a felted hat.” Similarly: “A handsome new long coat of wine-red with mother of pearl buttons down the front. His lace was as white as his fine even teeth, and his dark hair was more luxuriant than any wig.”

This latter comment introduces the reader to one of the controversies of the day. “But his Majesty has short hair, having shaved it off when he started to go grey – and now he wears a periwig.” Such descriptions make the context believable.

However, whether it would be possible for a horse rider to overhear the detailed conversations of two people in a passing carriage in a wet and muddy lane stretches the belief a bit far and reminds the reader that this is a fictional story. Indeed, some of the characters are barely introduced before they are murdered – the sheer number of casualties introduces a feeling of farce at times, regardless of the reasoning behind their deaths.

The historical note at the end of the book is most interesting and suggests that many of the characters have their origin in history, a shame, therefore, that no academic references are provided other than one reference to Samuel Pepys’s diary. This practice, sometimes adopted by other authors of the genre, would greatly enhance the enjoyment of those who like their stories firmly grounded in fact.

The writing throughout is fluent, with the dialogue sensibly straight-forward. There is no attempt to make the dialogue reflect the background or status of the individual characters. Pertinent and detailed description is used instead to identify each character.