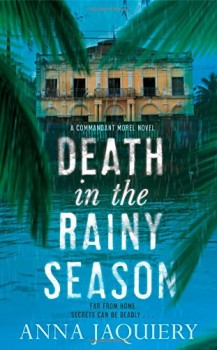 Death in the Rainy Season

Commandant Morel is sent to Phnom Penh to investigate the murder of the nephew of the French Minister of the Interior.

Commandant Morel, a man of mixed French/Cambodian parentage, is holidaying in Siem Reap when his Superintendant directs him to the Cambodian capital. Hugo Quercy, head of NGO Kids at Risk, has been battered to death, and his uncle the Minister wants to know why.

Morel finds difficulties immediately on arrival. No proper forensic examination has been made, and the hotel room scene of crime has already been cleaned. Moreover, Sarit, the Cambodian in charge of the case, seems disinterested, and Morel is forced to rely on French police attache Nizet for an understanding of political implications which complicate the case.

Morel discovers that Quercy’s activities extended beyond the rescue of children to the exposure of paedophiles, and to gathering of information on evictions for the benefit of developers, either of which would have earned him powerful enemies. But there are strong personal motivations too: Quercy’s drive and belief in his own infallibility coloured relationships with his subordinates at work, Adam and Kate, and with friends Paul and Mariko.

Morel himself is a sympathetic character, sensitive to the feelings of others but with a complex private life of his own. His expertise in origami is an unusual attribute for a detective. While in Phnom Penh he re-establishes contact with his mother’s Cambodian family, after many years, and this enables the author to introduce some background of the tragic history of the country.

There is also plenty of local colour: the rainfall, the birdlife, the life on the street, etc, although ultimately the insight is not particularly deep.
Despite Morel’s professed sensation of being out of his depth on arrival, he does not seem unduly troubled by lack of familiarity with the culture, and makes progress as detectives do generally, asking questions and testing hypotheses.

The story is narrated from the perspective of several characters, of which Morel is only the most important. Normally we are told through whose eyes we are viewing the action; sometimes not. Sarit, Adam, Kate and Mariko are all featured in this way, and we hear of their hopes and fears, as we do about Thierry, a local paedophile. Since much of the internal lives of these characters is peripheral or irrelevant to the death, reader interest is sustained only as far as they are interesting people, and some will find them not interesting enough.

This is the second outing for Commandant Morel, a follow-up to The Lying Down Room. There is enough in the detective himself and the exotic locations within which he operates to create initial curiosity, but if the author is to sustain a series something rather more will be needed.