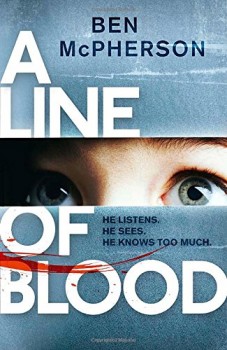 A Line of Blood

When Alex Mercer finds his neighbour dead in the bath, he’s caught up in a train of events that threaten everything he holds dear.

The events of one night are enough to threaten everything that Alex Mercer holds dear. When Alex’s 11-year-old son Max climbs the wall into their neighbour’s garden in search of his cat, he finds the back door of the house open and goes inside. The house appears empty at first, and Alex starts to get concerned, especially when he sees that the ceiling is sagging under the weight of water, indicating that maybe a tap has been left running.

To Alex’s horror, he discovers their neighbour dead in the bath, and isn’t quick enough to shield Max from the sight, a fact that later preys on his mind. The thing that stays in both of their minds is the sight of the man’s erect penis, which almost seems to eclipse the presence of the electric iron that seems to have been responsible for his death by electrocution.

The conclusion is obvious. The man has committed suicide, but it soon becomes obvious that there might be more to his death than that, and the police want to interview both Alex and Max. It struck me as slightly odd that they wanted to get the boy’s view of things first, even though his father had been present as well, but that was the only part of the narrative that failed to convince.

Alex and his wife Millicent are concerned about the effect on Max of what he’s seen, and want to do their best to minimise any psychological effects on the boy. They talk to his teachers, arrange an appointment with a psychiatrist, do everything they can to support him, but none of that is enough, especially when it becomes clear that Max’s mother knows more about their neighbour than she initially told them. And that’s when Alex’s life and his marriage start to steadily and inexorably unravel.

The story is told in the first person from Alex’s point of view, and it’s left up to the reader to form an opinion on how reliable a narrator he is. Ben McPherson gradually peels back the layers surrounding Millicent’s deceit, and as Alex delves deeper into the events surrounding their neighbour’s death he’s confronted with some very unpalatable truths.

A Line of Blood is a compelling and assured debut that should satisfy anyone who enjoys complex psychological thrillers.