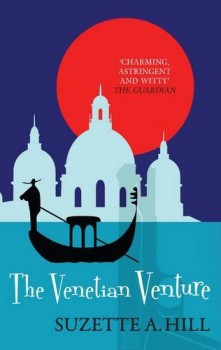 by Suzette A Hill

Rosie Gilchrist is sent by her boss at the British Museum to Venice to try to track down an important old volume of poems by Horace. Whilst there she comes across old friends, Felix and Cedric, and between them, encounter numerous difficulties, including a murder or two.

Rosie Gilchrist is sent to Venice to find a particular copy of Horace’s Odes. Whilst there she encounters Felix and Cedric, old friends from London who are on holiday. She finds that a number of other people are also on the track of the Odes due to a large reward being offered for the book, together with a particular Murano vase. The intrigue is played out amongst the canals and pallazi of Venice and after a number of adventures and deaths Rosie is quite ready to return to London.

The life of an expat in Venice is brilliantly evoked throughout the novel, with life a constant round of cocktails, coffees and lunches in cafes and beautiful old apartments. But such a life also means that poverty is an ever-present threat for many. So the lure of a very large cash prize is a tempting one. There are references to a number of well-known places in Venice, all instantly recognisable by those who might have visited in the past. However, the descriptions of the smaller places, the local jetties, the individual pallazi, and the boarding house where Rosie stays, are so well observed that the reader really is transported to Italy.

This atmosphere is added to by the snippets of Italian language that are integrated into the text, particularly in the first half of the book. There are too some little gems of detail, for example about the forgers of Venice, or the description of the elderly gondola in which one of the bodies is helped to disappear.

The characters are also beautifully observed. The men in particular are so well understood; the gentle bantering between Felix and Cedric; the way in which Rosie is patronised by Carlo; Edward’s approach to life in general, always ready to use people for his own profit; but also the rivalry between the siblings Edward and Lucia; or indeed the description of Lucia and her own selfish airs. The old ladies too, Violet and Duffy, are beautifully drawn, from their initial appearance in a social group to their need to ‘avail themselves of the facilities’ after climbing all the stairs to the apartment; their polite ignoring of a body in the apartment; and their final readiness for adventure. These people can really be visualised. Similarly there are many lovely moments of humour – the reference to Felix ‘prancing’; the body under the rug; and everything about Caruso, particularly his meeting with the poodle.

As a whole the story is gentle and almost slow in places, lulling the reader into a sense of comfort and complacency until there is a sudden change of tempo two-thirds of the way through the book. Then what might have been a red herring turns into something to be proved in the final chapters of the book. It might be argued that the solution is revealed a bit too early and that the importance of a comfortable ending takes priority over the maintenance of suspense and intrigue. However, the book is no less enjoyable for that and is a good antidote to miserable weather at home.