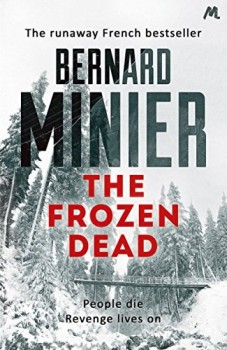 The grisly display of a horse carcass in an isolated mountain town initiates a police operation which soon widens when a macabre murder follows.

Commandant Martin Servaz is not impressed when the victim he is instructed to attend turns out to be a horse. But the horse is owned by Lombard, the head of a multi-national conglomerate, and has been strung from a cable-car ride in a manner suggestive of madness.

The setting is an isolated town in the Pyrenees in the depth of winter, with snow lying thick on the ground. And to add to the chill, the valley contains the Wargnier Institute, home to the most dangerous psychopaths in all of Europe. Could one of the inmates be responsible for the atrocity?

Given Lombard’s connections with upper levels of government, Servaz and Captain Irene Zeigler are told to give the case priority. They have made little headway, however, when a real murder takes place, again with a spectacular element: the body is displayed hanging from a bridge. The conjunction of the two events suggests a connection, but it takes a while before the revelation of past events gives Servaz a route to a solution.

Bernard Minier has taken every opportunity to satisfy readers who like to feel chills up their spine, from the first shocking vision of a decapitated and splayed horse hanging from the wires. The weather is invariably frigid, the valley and the buildings within it are dark, menacing, and full of shadows. Something strange is going on at the Wargnier Institute, a place of weird psychiatrists and barking inmates, one of whom has somehow left his DNA at both crime scenes.

Backing up the sense of uncertainty as to what is going on are the frequent comments from the participants as to the madness of modern life, spread by communication devices: ‘Insanity was indeed an epidemic, but its two preferred carriers were the media and the Internet.’ There is also distrust of the motives of upper echelon police and inter-agency tiffs which permeate the investigation.

Some readers may find the permanent emphasis on the black side a bit overdone. Certainly as Servaz rushes around at higher and higher speeds at some cost to his efficiency, his professionalism is called into question. The author also seems to have rather overdone the plot by attempting to hit as many buttons as possible.

Still, Servaz himself has some interesting traits: afraid of heights, afraid of horses, reads ancient texts and quotes Latin tags for any as will stand still for ‘em. His sidekick Zeigler dresses in leathers and rides a motorbike, and he has some endearing staff who appear from time to time. Minier just needs to restrain his impulse to cram so much in.