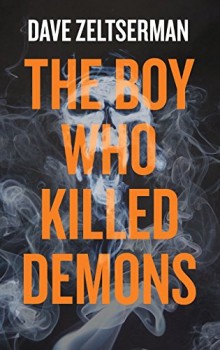 The Boy Who Killed Demons

When Henry Dudlow was 13, he started to see demons. Now he’s 15 and a half and knows that something needs to be done about them, but it’s not easy when you’re the only person who can see them.

When Henry Dudlow turned 13, he started to see the world around him differently. First of all, his neighbour, Mr Hanley turned into a raging demon with red skin, horns, yellow eyes, jaws like a pitbull and talon-like claws, the full works, in fact, and now, at age 15 and a half, Henry sees demons everywhere he looks.

He’s doing his best to work out what proportion of the population of his hometown are demons, but it isn’t easy, especially when he gets chased by the police for hanging around the outside of a strip-club, trying to see if more demons go in and out than normal people. He’s also doing his best to find out f there’s anyone else who can see demons, but that’s fraught with difficulty as well. And when a demon turns up in the same class as him at school, Henry starts to wonder if they’re on to him.

It’s not much fun being a boy who can see demons, and Henry is soon up to his eyes in trying to keep demons away from Sally Freeman, his girlfriend, whilst trying to track down an ancient text that he hopes will give him some information about how he can fight back against the demons. But demon-hunting isn’t easy for an average teenager with his parents on his case about anything and everything and a girlfriend who’d like some attention from him.

The Boy Who Killed Demons is a fast-paced look at life through the eyes of a very untypical teenager who’s trying to strike a balance between his newly-discovered sex-life, his falling grades at school and what seems to be his destiny as a demon hunter. Henry is a tough, clever and always entertaining narrator, especially when he’s balancing his home and school life with his extra-curricular activities that would give his parents a heart-attack if they knew what he was up to.

The story is narrated by Henry in the form of a journal, kept as a testament to his attempts to keep the world safe from something it seems only he can see. If anything happens to Henry, at least the truth – as he sees it – can still be told. The question readers of this stylish young adult fantasy thriller have to ask themselves is whether Henry is correct in his beliefs or simply delusional. There are no easy answers in Henry’s world, but I think you’ll enjoy his company.