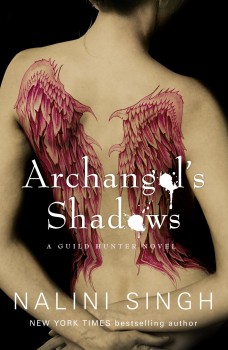 Guild Hunter Ashwini Taj investigates the murder of a young woman found drained of life and mummified. Something nasty is definitely lurking in the shadows of New York.

Joining a series on the seventh book is never easy, and the problems were made worse in this case by the plethora of characters: some angels, some archangels and some vampires. The angels have wings, and it appears that some of the vampires do as well, but unless I missed the explanation or it was hiding under the weight of adjectives and superlatives the author seems addicted to, there’s precious little by way of backstory, so it’s very definitely a case of sink or swim.

Confused already? Yep, I certainly was, and for at least the first 50 pages I couldn’t tell t’other from which, so to speak. But then the plot started to take off. Guild Hunter (no, I don’t know exactly what they do apart from hunt rogue vampires) Ashwini Taj and her vampire comrade, Janvier, are on the trail of someone capable of draining a body of all life and leaving behind a mummified husk. So there’s certainly a crime at the heart of the story and, as Archangel’s Shadows progresses, that comes more to the forefront, as does the hunt for the killer, or killers.

All this is set against a backdrop of angels seemingly in power and holding territory all over the world. The archangel Raphael is in charge of New York. He’s devastatingly attractive, as all the vamps and angels seem to be, and his wings and other physical attributes are lovingly described. Eyes are never anything as mundane as brown, instead they’re chestnut and burnt umber. The same goes for blue and various other colours.

Despite the at times purple prose, I did end up being to tell everyone apart and characters like the feline and dangerous archangel (or angel, I’m not quite sure which) Naasir, and the blunt and equally dangerous Dmitri, Raphael’s vampire second in command. There’s plenty of modern technology, and the city seems to carry on much as normal, but very definitely under the supervision of Raphael and his legions of angels.

If all this sounds a bit much, don’t be put off – it ends up as an engrossing read, and the characters do all fall into place eventually. And, in the hallmark of a good book, I know want to know more about how Ashwini and Janvier got together. This is very much their story, but there’s obviously a huge backstory there, only barely hinted at, and I want to know what it is. I also want to know more about Elena, Raphael’s tough, intelligent consort.

The Guild Hunter series reminds me a bit in its multiplicity of stunningly attractive characters of Laurell K. Hamilton’s Anita Blake series, but without the ridiculously over-done sex scenes. Yes, there are a few of them, but they fit the development of the plot and the characters themselves. If you like Hamilton, Charlaine Harris and Kim Harrison I’m pretty certain you’ll like Nalini Singh’s books. This is classy urban fantasy, and the murders do play an important part in the story. I’m now going to have start at the beginning.