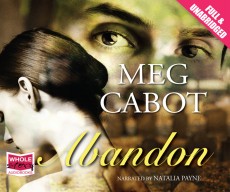 When Pierce Oliviera died there was no shining light at the end of a tunnel, just a gloomy cavern and a lot of confused people being herded into two different lines. But Pierce has never been very good at doing what she’s told. And she doesn’t stay dead, either.

I’ve been addicted to Meg Cabot’s particular brand of young adult urban fantasy for many years, starting with her Mediator series, written under the name of Jenny Carroll, and going on to the 1-800-WHERE-R-U books. She’s probably best known for the Princess Diaries, but if you don’t know her other books, I really can’t recommend them too highly.

So when I saw there was an audiobook of Abandon, the start of a trilogy that I hadn’t read, I was all over it like a rash, and it certainly didn’t disappoint. The narrator, 17-year-old Pierce Oliviera, is still struggling to come to terms with the fact that nearly two years ago, she died. There were no shining white lights, angels or pearly gates. Instead, Pierce found herself in a vast, gloomy cavern on the shore of an equally vast lake. Black-clad, tattooed men who looked like stereotypical nightclub bouncers were herding disorientated people into two lines, one considerably longer than the other, where they were waiting for an enormous ferry to dock.

Pierce didn’t like being told what to do, and when she recognises the tall, dark-haired man who’d been deciding who goes where, Pierce broke out of her line and promptly nearly got herself killed again. John, a man she’d first met when she was seven years old, hadn’t changed a bit, but Pierce had, and he didn’t recognise her at first.

Pierce didn’t stay dead for long, thanks to the efforts of the medics, but what happened to her has always been written off by everyone as nothing more than a NDE, otherwise known as a Near Death Experience. Pierce knows otherwise, and the strange colour-changing diamond on a gold chain that John gave her to keep her safe is her proof, but she knows that no one else will believe her.

When Pierce’s mother decides that they need a fresh start away from New York, Pierce isn’t exactly happy to end up on a remote island off the coast of Florida, where her mother intends to pursue her interest in rare birds while attempting to reconnect with her family and her roots. The move also brings Pierce into contact again with the enigmatic, irritating and attractive John. But the trouble is, every time he shows up in her life, someone gets hurt.

There’s been a lot going on in Pierce’s life, but the information needed to make up the whole picture is drip-fed on a very definite need-to-know basis; as a result, the story, with its frequent flashbacks can be a tad disjointed and frustrating on occasion. Fortunately, Pierce is an engaging protagonist, and narrator Natalia Payne does a very good job of portraying her. The writing isn’t quite as tight as Cabot’s earlier books and I was tempted to yell ‘get on with it’ during some of her more lengthy sentences, but that was a small price to pay for nine and a half hours of a very enjoyable young adult retelling of the myth of Persephone. And if you can’t remember anything much about Greek mythology, don’t worry, as neither can Pierce.