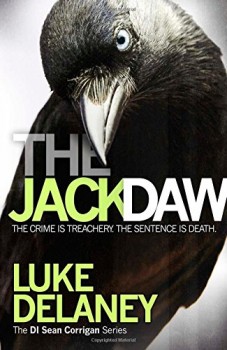 A masked man abducts a wealthy banker and he gives ordinary people watching on the internet the choice of whether the victim lives or dies. Naturally, there’s not much sympathy and the verdict is death, sparking an instant internet sensation.

When wealthy banker Paul Elkins is kidnapped and put on trial on the internet by a masked man, those watching on Your View aren’t sure whether they’re being conned or not. But after listening to the recitation of the man’s ‘crimes’ by his kidnapper, it’s clear that the viewers are in no mood to be lenient. Many of them had suffered in the financial crash caused by Elkins and his ilk, and this represents a chance to hit back.

Votes flood in; those finding him guilty registering a ‘like’ vote, with those who believe him innocent hitting the ‘dislike’ button. There’s little sympathy for Elkins, and the likes far outweigh the dislikes. The masked man, his voice heavily distorted, announces the verdict: Elkins is guilty and will pay the price for the suffering inflicted on thousands of people during the banking crash. Live, in front of countless viewers, he’s hoisted up in the air with a noose around his neck, and slowly strangled. It’s reality TV at its very worst – or best, depending on your viewpoint.

While this is going on, DI Sean Corrigan is getting ready for the trial of the man the press dubbed The Toy Taker, so it’s not the ideal time to be landed with another major investigation. But when the masked killer turns watchers on the internet into both judge and jury, the case is catapulted straight into the hands of Corrigan’s Special Investigations unit.

As ever, Corrigan comes under immediate pressure from his bosses to deliver results. He’s delivered results before and is under immense pressure to do the same, while fear spreads through the city and more victims are taken and put on the most public trial imaginable.

Luke Delaney is treading a very fine line in The Jackdaw, and at times I found my disbelief being suspended from a very slender thread. It’s hard to imagine the police would continue to allow a masked killer a platform to peddle his vigilante ‘justice’ just so they can get a line on his whereabouts. Yes, there is some nasty stuff on the internet, and if you’re that way inclined, you can seek out footage of terrorists beheading their victims, but it seems unlikely in the extreme that a thinly-disguised YouTube would allow its users to continue to vote on whether someone lives or dies.

Detective Superintendent Featherstone and Assistant Commissioner Addis reprise their roles as thorns in Corrigan’s backside, and profiler Anna is once again thrown into the mix, seconded to his unit to spy on him and report back to his bosses. With Corrigan’s marriage already under strain from his addiction to his job, this is a distraction he really doesn’t need.

Delaney’s strength lies in the fact that his characters all come over as real people. Corrigan, with his almost preternatural connection to the minds of the deranged criminals he’s up against, stays just on the right side of believable, even is he does flirt rather closely with the stereotype of the driven copper harbouring a dark secret.

The Jackdaw moves along at a decent pace, stepping outside the main characters at times with good effect to give a glimpse into the lives of some of the people watching events unfold. There are some clever red herrings, and Corrigan’s frustration with his inability to get a grip on the killer’s motives is well-depicted.  Despite my raised eyebrows at the central premise, I was hooked enough by Delaney’s storytelling abilities to stay on board, and there was absolutely no way I was putting the book down in the closing stages.