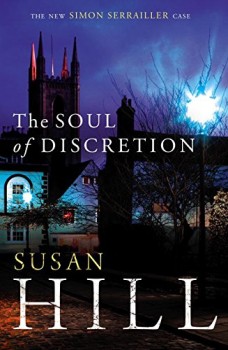 The Soul of Discretion

Chief Superintendant Simon Serrailler is selected to go undercover to try to identify the members of a paedophile ring. His mission begins in a treatment centre for convicted offenders but takes on a more dangerous line when his prime target decides to escape.

Chief Superintendant Simon Serrailler is in danger of settling down with a new partner when he is called to a meeting with the Chief Constable. It seems that he has been chosen to try to get a convicted paedophile to reveal his contacts. His first task is to go undercover into the treatment centre, a secure unit, which his target has chosen to join.

Adopting an assumed identity, Simon moves in, but just as he is beginning to make progress, the target, Will Fearnly, decides to escape and suggests that Simon goes with him. Simon has some difficult decisions to make.

Despite this being a book that deals in difficult topics, it is highly readable and uses short snappy chapters at the start to help get over a great deal of information about the subject matter. Simon has to learn fast and the reader learns with him. There are several distinct plot lines that raise complex issues. The book is, however, completely absorbing and fair in its coverage of attitudes. The characters are sympathetically presented, including for example, some really sensitive discussions about death with an elderly woman dying of cancer. Indeed, all the issues raised are those that might normally be avoided.

On a more basic level there are some aspects of the book that are much more atmospheric than others. When Simon and Will are crawling along a ditch in open country the fairly long description could be judged as lacking suspense, although at one point a helicopter comes near. This might be very much more atmospheric in a more visual medium – written with film in mind perhaps. Similarly, aspects of the final denouement also perhaps are not as strong in prose form as they might be visually.

But the book’s great strength is in portraying the emotion felt by the characters in difficult situations: the group session in the therapy centre, the feelings of the rape victim trapped in the atmosphere of an old-boy network, the dying woman whom everyone keeps trying to jolly along. These are all superbly portrayed.

A small matter of frustration is that sometimes it is not easy to sort out which character is speaking, necessitating reading passages more than once, which interfered with the otherwise natural flow of the novel. However, it is worth persevering with the book, despite the unpleasant context which in general is kept in the background.