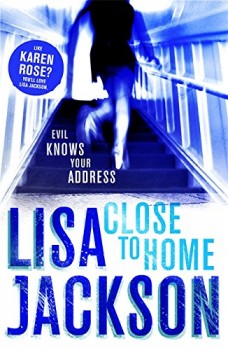 Sarah McAdams returns to her childhood home with the intention of restoring it to its former glory. Is the house haunted, or is it the over-active imagination of Sarah’s younger daughter? Then teenage girls start to disappear from the town.

Blue Peacock Manor is a massive Victorian pile set high above the Columbia River in the small town of Stewart’s Crossing, Oregon, now sadly fallen into disrepair. It is said to be haunted by the ghosts of former occupants who have suffered violent deaths. But to Sarah McAdams, it is her childhood home and when she needs a new start, she returns to the house with her two daughters, Jade and Gracie. She intends to restore the house to its former glory, but first she needs to come to terms with her own troubled childhood and her difficult relationship with her mother.

Jade is a typical teenager. She resents being moved away from the big city and her boyfriend and hates living in a small town. Gracie, on the other hand, is convinced that she has seen ghosts in the old house and is eager to solve the mystery of the disappearance of the original owners.

Then a teenage girl disappears from the town. Has she run away or been abducted? When more girls disappear, it is clear that they have not all run away, but the police have no leads. Where are the girls and who has abducted them? And what are the dark secrets of Blue Peacock Manor and Sarah’s family?

This book is principally about Sarah McAdams, her dysfunctional family and her need to uncover the secrets of her childhood. The abduction of the girls is almost a sub-plot to the main story and there are few details of the police investigation. Having said that, as an exploration of family relationships, it is a compelling read. The supernatural element leaves much to the imagination of the reader and anyone who has lived in an old house will relate to the creaks and bumps in the night and the creepy atmosphere of the long-abandoned attic and cellar.

The main characters are well developed, with extensive back stories and many character insights. The remaining cast, however, is much more sketchily drawn and there is little exploration of the motivations of the criminals. There are also some annoying loose ends; for example, a body is dumped and although it is later mentioned in passing, the murder is never resolved.

All in all, this book is more for those interested in family dynamics than for crime fans, but it’s worth a read as an alternative to the grimmer type of crime novel.