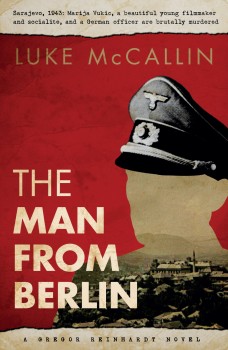 The Man From Berlin

German intelligence officer Gregor Reinhardt, a former Berlin detective, is assigned to investigate the killing of a German officer and a beautiful young Croat filmmaker against a background of internal rivalries, partizan attacks and growing anti-Nazi feeling.

Bold, brutal, bloody and brilliant, Luke McCallin’s debut, now reissued under the No Exit imprint, is an outstanding wartime thriller which goes well beyond the classic criminal novel and offers the reader some fine analysis of modern history, something not too often present in the genre.

Bold, because an Abwehr officer in an occupying army in one of the last war’s nastiest sectors, is hardly a natural hero. But in Gregor Reinhardt, a former Kriminal Polizei detective and a soldier with a troubled conscience, McCallin has created a complex and conflicted individual, deeply affected by the death of his wife, despised by his Nazi son and tortured by his experiences on the Eastern front.

He seeks redemption in his work and is relentless in his pursuit of the killer despite the efforts of colleagues and superiors to avoid possible political embarrassment. His personal and ethical doubts balance his professional experience and add subtlety and momentum to a credible story line and a well-researched portrayal of German-occupied Bosnia.

The Man From Berlin is set in Sarajevo in 1943. Reinhardt must solve a nasty double murder involving a German officer and a beautiful, but politically motivated local film maker and socialite. He and the reader are drawn into a world where nothing is what it seems. Friends become enemies and enemies friends, as alliances are forged through necessity.

It’s brutal and bloody, because of the setting  – the vicious four-sided war fought without quarter or pity between the German and Italian invaders, the Croats and their barbaric Ustase militia, the Serbian Cetniks and Tito’s multi-ethnic Communist partizans, with the Bosnian Muslims trapped and slaughtered in the middle of the warring parties.

And the situation among the occupiers is little better, with the rivalries and ambitions of the SS, the Gestapo, Wehrmacht and the Abwehr providing an authentic and often impenetrable maze as dense as any Balkan plot.

It’s brilliant because you can read this as an action novel or a murder mystery centred on a piece of historical writing. None of the key participants  – the ‘Chain Dogs’ of the German military police, the Ustase, the Partizans and even the emerging German Resistance movement against Nazi excesses – are simply black and white. All have enough blurred edges and contradictions to make them both fascinating and realistic.

The pace and structure make this a compelling read. Sarajevo itself becomes a key part of the story and the sharp descriptions of the city and its place in history, together with the rugged and mountainous countryside, the setting for the denouement during a major push against Tito’s forces, merely adds to the tension.

Many of his characters appear based on real life. The Foreign Ministry official, Reinhardt’s mentor and anti-Nazi Resistance leader, bears a strong resemblance to Ulrich von Hassell, executed after the July 1944 plot against Hitler. And the British officer who makes a brief, but key, appearance can only be Captain, later Sir, William Deakin, parachuted in to join the Partizans during the Sutjeska battle. But this leads to McCallin’s only mistake – liaison officers were forbidden to take PoWs.

In masterly fashion, McCallin delays his ‘reveal’ until the very last – and draws all the tangled threads together in an explosive final 20 pages, with Reinhardt left facing a dilemma which perfectly sets up the next book in what may become a cult series for the serious reader featuring a compelling mix of a well drawn and sympathetic central character and violent and authentic historical action.