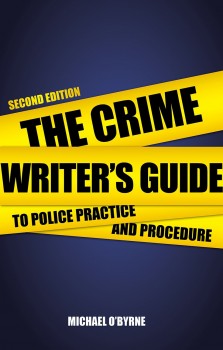 The Crime Writer's Guide To Police Practice and Procedure

A guide to police practice and procedure for crime writers.

The second edition of The Crime Writer’s Guide to Police Practice and Procedure does pretty much what it says on the tin and aims to present a relatively simplified account of police work.

The ten chapters, each broken into short sections, cover the beginning of an investigation, the powers available to the police to deal with suspects, a guide to forensics, profiling and serial killers, organised crime and international policing, the use of force, a police miscellany, technology and the relationship of the police to other agencies.

In the preface to this second edition, Michael O’Byrne, the former chief constable of Bedfordshire, makes it pretty plain where he stands on the matter of the creation of the role of the new Police and Crime Commissioners, describing it, almost certainly correctly, as an office unwanted by the general public and understood by no one other than the Home Secretary whose idea it was.

He’s equally lacking in reticence in his advice on a wide variety of plot devices, given both to aspiring writers and the more seasoned crime writer, but as he mentions very early on in the book that he has, as yet, failed to find a publisher for his own crime thrillers, I was left feeling that perhaps some of this advice should possibly taken with a pinch of salt, and that readers would be better concentrating on the practice and procedure that O’Byrne describes.

The writing is clear, even when dealing with technical matters, but it did leave me feeling that the treatment of the various sections was somewhat more superficial than I would have liked. However, taken on its own terms, the book does succeed in providing a welcome overview of a complex subject. The first chapter, dealing exclusively with how a murder enquiry is set up and run, contains a concise explanation of the make-up of the team, the likely ranks that would be deployed and gives an insight into how the mass of information generated by a major enquiry is handled.

As a retired solicitor, I found nothing to quibble with in the explanation of the various powers available to the police when dealing with suspects, ranging from the much debated and criticised powers to stop and search through difficult areas like illegally obtained evidence.

I felt equally confident in the sections handling the basics of arrest and detention, search powers and cautions, all areas in which crime writers can often seem to lose their way, sometimes for reasons of dramatic effect and sometimes simply through ignorance. The section on the interview process was of particular interest as it’s such a stock weapon in the crime writers’ armoury that it was nice to get an insider’s view of the tactics employed by the police at a crucial stage of the investigation.

Despite my occasional misgivings when the author starts to hand out writing advice, this is an easy, informative read that doesn’t get bogged down in too much detail, but does succeed in its aim of helping writers negotiate the sometimes murky world of criminal investigations. However, O’Byrne makes no mention at all of the single most common mistake I come across in police procedurals, female officers still being referred to as WPCs, well over a decade since the term was last validly in use. It’s an odd omission in an otherwise reliable guide.