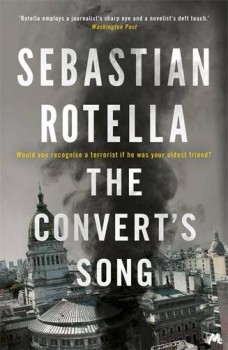 Investigator Valentine Pescatore is arrested after a terrorist attack when police find he received a warning on his phone before the event.

Valentine Pescatore, formerly of the US border agency, is doing private surveillance and executive protection work in Buenos Aires. Apparently by chance, he runs into Raymond, a friend from his youth, whose criminal tendencies led Pescatore to break contact.

A few days after the meeting, terrorists attack a shopping centre and Pescatore is dragged in as a suspect when a warning is discovered to have been sent to his mobile before the event. His links to US intelligence are sufficient to extricate him, and he joins forces with French agent Fatima Belhaj to find out more about the terrorist plot.

Aided by Valentine’s insights into his old friend Raymond, and the resources of friendly intelligence agencies, the pair expose the detailed workings of an international web of criminal activity interlinked with Islamic extremism. Valentine eventually gets closer to Raymond, but whether he can be saved from the consequences of his past actions is another matter.

This is a follow-up to Triple Crossing, Sebastian Rotella’s debut novel, and also has much to like. There is plenty of action from the beginning, insights into criminal and terrorist plots, glimpses into the workings of various national police forces, and unvarnished observations on the way societies’ imperfections leave them vulnerable to those with an agenda and the ruthlessness to pursue it.

Rotella’s experience as an international reporter comes through in the convincing way he depicts the seamy side of the places his protagonists visit. As the action begins, Pescatore is paying off an Argentine judge on behalf of a client, and subsequent revelations about how local law enforcement interacts with criminals are as startling as they are believable. There is background as to how the potential of the US/Mexico border is exploited by criminals, and an informed explanation as to the pressures arising from a large population of disaffected youth in Paris.

The plot is perhaps not so convincing. Raymond is billed as a smooth and slippery character with his fondness for Valentine being his only departure from an otherwise ruthless pursuit of his own self-interest, but his links to Islamic terrorism seem to show ambivalence that would surely hamper his effectiveness. Just how far an amateur would be accepted in the world’s counter-terrorist agencies seems also questionable.

But let’s not quibble – this is a book which absorbs the reader from the first few pages, with plenty of action throughout and a steady drip of revelations until the true nature of Raymond and his activities becomes clear, culminating in an expedition into Iraq which is only for the very brave, or very foolhardy. The Convert’s Song is a thriller which gives some real insight into the workings of some very dangerous places.