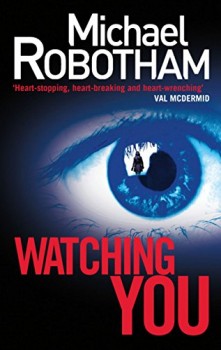 Marnie Logan, single mother since her gambler husband disappeared, often feels she’s being watched. She turns to clinical psychologist Joe O’Louhlin for help, but when she discovers a book her husband was preparing for her birthday, her situation quickly spirals into one of fear and horror.

Clinical psychologist Joe O’Loughlin and his friend, retired DI Vincent Ruiz, become involved in the case of Marnie Logan, whose gambler husband has disappeared, leaving her with a delicate young son and a teenage daughter just beginning to express her independence, plus a huge debt to a vicious loan shark who is forcing her to pay it off as an escort girl.

Marnie herself has a troubled psychiatric history and when the investigators probe her past they quickly discover that anyone who has crossed her in the past has met with some kind of nasty accident. When the loan shark’s minder and then the man himself, are horrifyingly murdered, the police find evidence that seems to point straight to her.

O’Loughlin thinks she may suffer from a rare split personality, but when the incidents mount up is forced to consider the possibility that her story that she often feels watched may be true – and that there is a stalker who knows everything about her life and is making it his business to ‘protect’ Marnie from anyone he sees as trying to hurt her.

Michael Robotham’s mastery of his subject – in this case the psychosexual disorder of voyeurism and its near relative obsessive stalking which can so easily spill over into anger and a destructive desire for revenge – is matched by his ability to weave such complex issues into a plot which is not only horrifyingly believable, but also gathers pace through a series of surprises which eventually lead to a carefully disguised but perfectly logical conclusion. The writing is well paced and absolutely faultless and his shrewdly observed characters have a down-to-earth reality which contribute to what is a truly gripping read.

Robotham began his career an investigative journalist, became a ghostwriter on bestselling autobiographies for pop stars, actors and politicians and somewhere picked up enough psychological background to sell more than a million copies of his first book Shatter. His pairing of the cerebral O’Loughlin, fighting the onset of Parkinson’s disease and a failing marriage and the more physical and practical Ruiz, is one of the most imaginative and believable ‘buddy acts’ in modern crime fiction. This latest enthralling outing for the pair is a compelling and sometimes disturbing read which saves one more shock for literally the last line.