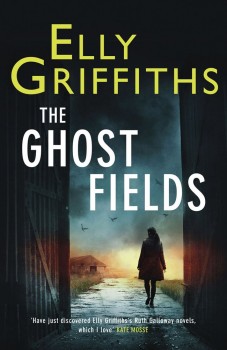 Archaeologist Ruth Galloway uncovers some dark family secrets as she helps police investigate the discovery of a World War II fighter plane with the wrong body on board.

By the time I’d got to the end of the generally terrific The Ghost Fields, I felt like I’d sat through a particularly fraught episode of East(Anglia)enders. Blimey, some people have complicated love lives.

University lecturer Ruth Galloway is one of my favourite lead characters in the genre. She’s intelligent, independent and doesn’t survive on a lettuce leaf a day. Although she does have a complicated love life, as do most of those around her.

Ruth’s five-year-old daughter Kate was fathered by dour DCI Harry Nelson, who is still with his glamorous wife Michelle, despite the fact she knows he’s played away from home. DS Judy Johnson, who’s about to drop a sprog at any time, is shacked up with Ruth’s druid friend Cathbad. Laddy DS Clough is about to fall head over heels in love. And new recruit Tim has a love interest that he’d rather not share with his police colleagues. Ruth’s best friend Shona is partnered with tiresome head of school Phil, who is miffed that Ruth always gets the TV appearances that he craves. And American historian Frank Barker is back on Ruth’s wobbly radar. Do keep up at the back – this is just the good guys!

Don’t worry – the personal stuff never quite swamps what’s an intriguing plot. Instead, it makes the characters feel like folk you’d meet down the pub (well, maybe not Cathbad, unless you live in Glastonbury …)

Throughout this series, Elly Griffiths has taken ideas from different parts of East Anglian history to keep archaeologist Ruth gainfully employed. This time it’s World War II, and the title refers to the ghost airfields which dotted East Anglia. A plane is dug up with a body in it on the site of a controversial planning development. Except, that particular body shouldn’t have been in that particular plane – and was almost certainly bumped off elsewhere. The police investigation centres on the strange Blackstock family in their remote rambling house.

That creepy big house and the 2013 floods provide an outstanding finale where everyone is not quite as they have seemed.

Once or twice Griffiths’ usually sparky prose is hampered by her use of the present tense, and I had to re-read a passage to work out why she’d suddenly crunched into past tense. But otherwise, The Ghost Fields is a stellar addition to Ruth’s reluctant adventures. And I’m fervently hoping that those complicated love lives never overwhelm one of the most entertaining series around.