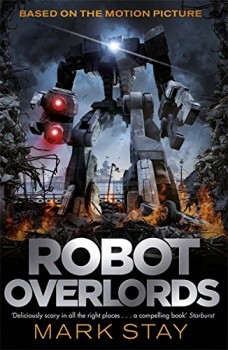 Humanity has lost the battle for its autonomy and robots are in control of the Earth. The survivors are being confined to their homes for seven years but the robots claim, they’ll then leave peacefully. Robots never lie, so they say, but can they be trusted?

Hard on the heels of the popularity of films such as Pacific Rim and Transformers comes Robot Overlords, a British-made film starring, amongst others, Gillian Anderson (familiar to fans of the X Files), Ben Kingsley and Callan McAuliffe. The tie-in novel has been written by Mark Stay, the scriptwriter and co-creator of the film.

Three years ago, Earth was attacked by an overwhelming force of robots arriving from space and blasting humanity into submission using a combination of powerful weapons and the ability to disrupt fatally the technology relied on by armed forces all around the world. After a devastating loss of life on every continent, world leaders have no choice but to capitulate.

The robots claim they want to know all there is to know about human beings, harvesting knowledge in a variety of terrifying ways. While this is going on, everyone is confined to their homes, controlled by implants forced on them by the robots that allow their every move to be tracked. Venturing outside brings with it an instant death penalty, with no chance of reprieve.

Robot Overlords focuses on a disparate bunch of teenagers living in close proximity in the same street, somewhere in a UK coastal town. Sean, still desperately clinging to the hope that his RAF father is still alive somewhere, is a natural leader, but his plans often consist of rushing in and making it up as he goes along. There’s Nathan, bull-shitter extraordinaire, who likes messing around with whatever bits of technology are left to them. Alex, his sister, is prickly and tough, giving as good as she gets.

Connor, the youngest of the group at only ten, saw his father executed when he made a dash for freedom, mad with grief for his wife who’d been killed by the robots for resisting. Connor’s a scared kid struggling to cope with the death of both of his parents, but his insights and quirky knowledge often succeed in getting them all out of trouble on more than one occasion.

Anyone who’s read John Christopher’s Tripods trilogy from the late 1960s or seen the 1980s TV series based on the books, will instantly feel at home with Robot Overlords. The book has much the same feel, although teenagers and even younger kids talk very differently now! I was very amused when Connor came out with the worst combination of words he could put together and ended up with ‘arse biscuits’. I have a caving friend who’s particularly fond of that combination of words!

This is a great story of survival against the odds. It’s fast-paced, engaging and requires surprisingly little suspension of disbelief, despite the central premise. The characters are real people and what happens to them quickly comes to matter. Tie-in novels can often feel somewhat flimsy, relying heavily on what the readership already knows about the characters from their screen presence, but Mark Stay has avoided any such pitfalls. His characters come to life instantly, practically jumping off the page, all you need to know to care about them sketched in a few simple but always well-chosen words.

I was wholly caught up in the story of Sean and his friends and read it in two sessions, cheering on their attempts to fight back against both the robots and the slimy, lying Mr Smythe, who’s got his eye on Kate, Sean’s mum. Smythe, now working with the so-called Volunteer Corps, naturally took the opportunity to come out with the immortal line, ‘I, for one, welcome our robot overlords.’ I would have been very disappointed if that hadn’t been used somewhere! And yes, I am very definitely going to see the film! As with The Tripods, I’m living in hope that this will spawn a series. I can thoroughly recommend the film, as well!