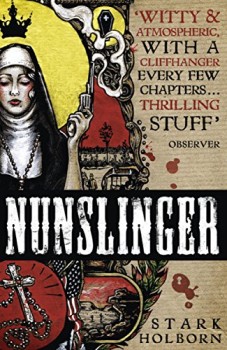 Visitandine nun Sister Thomas Jospehine is a survivor of an attack on a California bound wagon train, in 1864.  She goes on the run, building a legend as the Six Gun Sister as she flees across the south west.

The Western is never going to be the same again. The gun-toting Sister Thomas Josephine, a Kindle hit in editionalised form for her so far unrevealed creator, has now blasted her way into mainstream publishing – and looks set for a long career as a cult heroine.

Nunslinger is a fun read with all the standard Western ingredients: good and bad guys of both sexes, bandits, whores, drunks, Indians, blazing guns, chases, jailbreaks, daring rescues, miracle escapes and all sorts of mayhem. It’s something like a literary compendium of The Magnificent Seven, High Plains Drifter and the Outlaw Josie Wales, and trying to describe the plot in any detail would require a book in itself.

Visitandine nun Sister Thomas Josephine is a survivor of an attack on a California-bound wagon train in 1864. She’s rescued by an obsessive cavalry officer, kidnapped by a taciturn and mysterious deserter, and then the innocent nun is falsely accused of murder and goes on the run, building a legend as the Six Gun Sister as she flees across the south west.

But for all its swashing of gunbelt buckles, this is a far more serious book than a brief description and its ear-catching name and cartoonish cover illustration imply. It is also the sort of complex morality tale that will remind aficionados of the early best of the genre – when writers frequently used the chaos of a violent and uncivilised society, set in a bleak and in hospitable landscape, as a setting to highlight the best and worst of man as part of a wider examination of what makes us human.

Sister Thomas Josephine is a new and welcome part of that great tradition. Her adventures are set against such major social changes as the bloody and brutal civil war and Lincoln’s murder, the frequent massacres and ethnic cleansing of the Native Americans and the sheer greed, often enforced by the most violent means, which saw an emergent nation eventually physically united by the railroads.

Faced with such moral ambiguity, Sister Thomas Josephine is engaged in a constant struggle to maintain her faith and her simple belief that every soul can be brought to salvation and that no man – bandit, thief, drunk, killer – is totally beyond redemption.

The story is told in the first person through her eyes. Sharp writing, an over-the-top, but addictive, original and compelling story line that will grab you even if you’re no Western fan, cleverly sketched characters  – the Native American woman who sets out to avenge her slaughtered and enslaved tribe is almost Biblical in her intensity – this is one of the finest books of its type you will come across.

Genre-bender it may be, changing pace and tack as often as Sister Thomas Josephine changes her habit for men’s clothing – and even occasionally women’s – but for a great uproarious read with some real moral questions to stretch the mind, this one lands all six rounds in the target area of best Western in years!