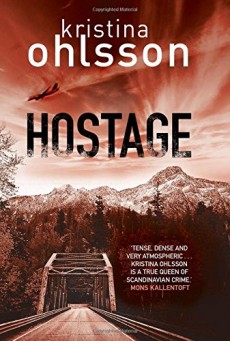 A plane bound for New York from Stockholm is hijacked on its way across the Atlantic. Unless Sweden and the USA accede to the terrorist’s demands, the plane will be blown up.

I’m not normally drawn to the vast array of Scandinavian crime that finds its way into the market, but I was hooked by the premise of Kristina Ohlsson’s Swedish thriller, Hostage.

A flight from Stockholm to New York might have a bomb aboard, according to a note found in one of the toilets. In view of the number of bomb threats Sweden has been receiving, they can’t afford to take this one lightly, especially when it becomes clear that one of the crew might well be in league with the terrorists. The hijackers demand that the Swedish government agrees to reverse its decision to deport a Moroccan man.

They also have demands for the US government as well – the shutting down of a clandestine detention centre in Afghanistan. Neither country is willing to negotiate with hostage-takers despite 400 lives being at risk, so begins that classic trope beloved of thriller writers – and me – the race against time. The plane only has a limited amount of fuel, the US say they’ll shoot it down the minute it enters US airspace, but the pilot is determined to land there.

While all that is going on, Frederica Bergman, who works in the Justice Department, is acting as liaison between Police Superintendent Alex Recht and the entertainingly abrasive Eden Lundell, an agent with the Security Service’s counter-terrorism unit. As the plot thickens, Recht has a very definite vested interest in keeping the aircraft passengers alive – his son Erik just happens to be the co-pilot.

Ohlsson handles the multiple points of view through which the story is told with deft style. There’s no head-hopping or confusion when you’re on board with one character or another, which makes a refreshing change. The story moves along at a good pace throughout, with the tension ramping up quickly and staying there.

It was apparent that some of the characters are recurring ones from Ohlsson’s other books, but that’s no hindrance, and it left me wanting to search out the others. That’s always a good thing, unless you’re a reviewer, as that just adds another heap of books to an already tottering pile or an over-crowded e-reader. The combination of taut, tense thriller and intriguing police procedural was definitely a winning formula for me.