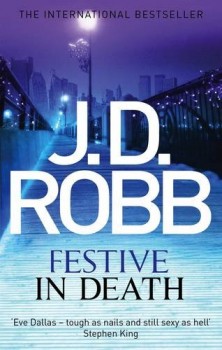 When personal trainer Trey Ziegler is found dead, there is no shortage of suspects, but when Eve Dallas uncovers his darkest secrets, the story takes a murderous twist.

It is the week before Christmas and Eve Dallas is dreading the coming round of parties and socialising. She still has to buy presents for her nearest and dearest and has to participate in the arrangements for Roarke’s extravagant Christmas party, much to her disgust.

A middle of the night call from her beauty therapist, Trina, however, leads Eve to a murder scene. Personal trainer Trey Ziegler has been bludgeoned to death with his Trainer of the Year trophy and left with a note pinned to his chest with a kitchen knife saying: “Santa says you’ve been bad!!! Ho, ho, ho!”

As Dallas and Peabody investigate, it rapidly becomes clear that Trey has numerous enemies and the suspect list grows alarmingly. The more they learn about him, the more it seems likely that one of his clients killed him and the investigation focuses on one rich but dysfunctional family. But which of them is guilty? All have strong motives and apparently solid alibis and when there is another murder, anyone might have done it.

The first victim, Trey, is a thoroughly unpleasant character, but Eve is determined that she will do her best to find out who killed him, for that is her job. While having sympathy for some of the suspects who have previously been Trey’s victims, Eve is determined that her investigation will bring the murderer to justice, however much she dislikes the victim.

Eve’s difficulty in dealing with social situations is a major backdrop to this book. She is simply very uncomfortable making small talk to people she barely knows and doesn’t see the point of dressing up for special occasions. Roarke’s gentle persuasion and insistence that she must do her part cause her significant worry as she desperately doesn’t want to disappoint him, so she reluctantly does her part, but gets back to work as soon as she can.

Festive in Death is another very entertaining book from JD Robb, and the writing is up to her usual high standards. There are, perhaps, fewer plot twists than in some murder mysteries, but the ongoing story of Eve, Roarke, Peabody and the NYPSD is an absorbing background to the cases they solve. I am eagerly looking forward to the next in the series.