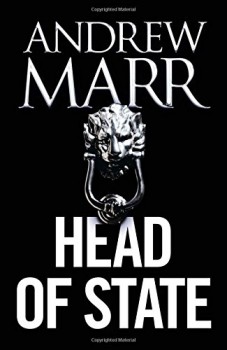 With Britain on the edge of a political precipice, two bodies discovered in London, one a young investigative reporter, the other – minus head and hands – arouse little interest. There appears no connection, but both are part of a shocking secret at the heart of government.

Andrew Marr describes his first fiction venture as a ‘political entertainment.’ It’s far more. The Scottish-born, Cambridge-educated, former BBC political editor has long been regarded as one of the shrewdest observers of Westminster and Fleet Street and is also a hugely successful non-fiction author and broadcaster.

Here he applies that insider knowledge in a clever, part-dark, part-hilarious spin through the corridors of power, which, while making a serious point about abuse of power, also offers an irreverent glimpse behind the parliamentary curtain. Think House of Cards meets The Thick of It, then add a shadowy fixer worthy of John Le Carre or Ian Fleming.

Head of State is set in the not-too-distant future and following the promises of Blair, Brown, Cameron and Johnson (Boris, one presumes, not Alan), Britain is finally to have its In-Out referendum on Europe. The issue has split the country – and the ruling party – with the popular ‘man-of-the-people’ PM in favour of staying in and his former Home Secretary resigning to gazump UKIP and lead the opposition.

Few people take notice when a dissolute investigative reporter is found dead in the street, but when another body – minus head and hands – is washed up in the Thames, the rapidly declining popular press shows an interest. There appears to be no connection between the dead men and a shocking secret at the heart of government, where a ruthless and determined group will stop at nothing to prevent the truth from getting out.

To say more would be to destroy a clever – and not entirely unbelievable – plot, an examination of how far individuals will go in pursuit of power or ideals. Mixed with this look at the darker corners of the corridors of power is a deft, wicked and witty, almost Ben Elton-ish farcical examination of the inner workings of the establishment.

Marr was given near-unprecedented access to Downing Street for his research – and it shows. It does too in his characters. Those not real are based on reality. Shades of the well-known from Simon Schama and Kelvin McKenzie to Dame Stella Rimington, General Lord Richards, former Chief of the Defence Staff and the late Admiral Sir ‘Sandy’ Woodward, to an absolute masterpiece of a portrayal of King Charles, haunt this novel – and impressionist Rory Bremner will never get such a good press again! Marr’s not above settling old scores either. Historian Dominic Sandbrook, who once panned one of his non-fiction works, gets his come-uppance here.

This is a book that has sharply divided readers. ‘Completely ridiculous’; ‘extremely juvenile’; ‘few redeeming features’; are some of the complaints. If there’s a weak point, it’s the ending, which all happens a little too quickly and leaves quite a number of unresolved loose ends.

If you don’t want, or can’t understand, an insider’s look at politics, told with wit and a certain old-fashioned charm, stick to comic book coppers, endless sex and violence. But if you’re informed enough to take an interest in current – and future events – this is a brilliant and entertaining read.