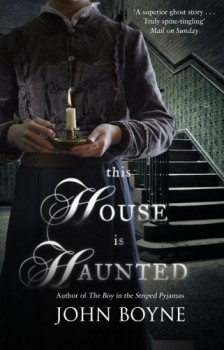 This House Is Haunted

Eliza Caine arrives at a remote hall to take up a position as governess to two children. From her arrival she is subjected to a series of strange and terrifying events as she struggles to unlock the secrets of their home.

Many readers will know John Boyne’s work through his delightful and appealing The Boy In Striped Pyjamas. If you haven’t come across him before, give this one a try. Boyne is a classic, old-fashioned Irish story-teller. He might just as well be sitting by a turf fire with a glass of porter in his hand and the shadows lengthening into night outside the window as he spins his tale.

Quaint? No. Boyne’s clever use of language and attention to style makes what is hardly a new story attention grabbing, more than sufficiently creepy and surprisingly vibrant.

Eliza Caine, a young teacher at a school for girls lives happily in London with her beloved father. When he dies suddenly, she decides on impulse to answer a newspaper advertisement for a governess in Norfolk. To her surprise, she is offered the post and, almost before she has time to think through her future, she is leaving her old life behind. But immediately on arrival she is plunged into a series of supernatural events which threaten her life.

As the rather sheltered Eliza discovers strength and stubbornness within herself, the story builds to its conclusion – taking in almost everything you could want in a ghost tale: two withdrawn and slightly odd children, an isolated and crumbling hall, a taciturn caretaker, locals who turn away when Eliza mentions she is the new governess, a mystery nurse, an invalid in the attic, nasty family secrets and, naturally enough, a malevolent presence hovering over all.

This is an ideal read for those who like their ghost stories creepy, rather than downright frightening, beautifully written with excellent characters and a well drawn, if slightly predictable story which will draw you in.

Boyle slyly livens his tale with references to other authors and novels, but stops short of drawing too obvious a parallel with Henry James’ ambiguous but brilliant The Turn of the Screw, with its amazing ability to create confusion and suspense. If this book owes much to the Anglo-American genius it’s none the worse for that – and a great read.