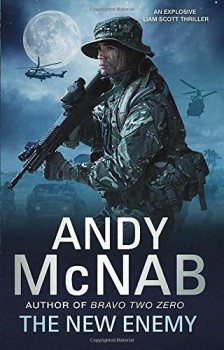 Liam Scott, a new recruit to the elite reconnaissance platoon, is on his way to Somalia on a mission to gather intelligence about terrorists active in the area.

Liam Scott has won a coveted place in an elite reconnaissance platoon after a series of gruelling exercises designed to test both physical and mental strength. He gets the opportunity to put his skills to the test for real when he’s deployed to Somalia to gather intelligence on a ruthless militant organisation known as Al Shabaab.

I had to stop several times whilst reading The New Enemy to double-check whether it really was intended for a younger audience than Andy McNab’s usual military thrillers and, to be quite honest, it was only the name of the publisher that provided the answer rather than any clue in the text.

There’s every bit as much hard-hitting action, entertainingly descriptive bad language and black humour as there is in his Nick Stone and Tom Buckingham books, and whilst Liam is some years younger than McNab’s other protagonists, he’s certainly not any softer. But he’s not superman. He stays well on the right side of that divide. He’s human, he makes mistakes, he learns from them and he grows as a character.

I haven’t read the first two books in the series, but would certainly like to remedy that to see how Liam ends up undergoing selection to one of the army’s top units. The characters are sparky and likeable, the dialogue is realistic and the soldiers are suitably hard without becoming caricatures. Even the minor characters come to life and what happens to them matters. There are no red shirts in McNab’s stories, and you can’t predict in advance what the outcome of any contact with the enemy will be.

This is certainly not a book your grandmother would approve of, and some parents might recoil at the language in places, but I imagine most teenagers will have heard far worse and certainly won’t be as easily shocked. And if you like McNab’s other stuff, I have no doubt that you’ll like this as well. I certainly did.