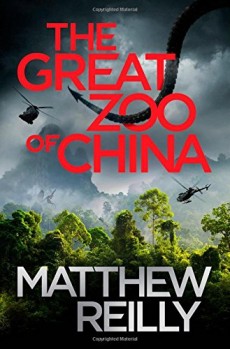 The Great Zoo of China

A party of American VIPs is invited to view a spectacular new zoo in China. But the unveiling doesn’t quite go as planned.

Matthew Reilly has been king of the eccentric willy-waving thrillers for a while. When he hits, you hold on to your hat and enjoy the ride, knowing you’ve checked in your scepticism at the door. When he misses, there’s enough egg on faces to make omelettes for all of Australia.

There’s only one way to describe The Great Zoo of China: it’s madder than a totally mad thing with a PhD in Barking Madness from the University of Mad as a Snake. My eyes were rolling so much that I was in grave danger of levitating off the sofa.

This is a book that’s never in first gear or reverse – it’s foot down, breaking the speed limit adrenaline rush all through. Which is all very well, m’lud, but a woman needs to be able to catch her breath now and then. But I suppose you don’t buy a Reilly book for the nuances of the pacing …

The Russians are getting a rest from their role as bad guys, and the action focuses on China. CJ and a party of American VIPs and media sorts have been invited to view an incredible new zoo. Except, things don’t quite go as planned at the grand unveiling.

OK, let’s put aside the totally insane plot for the time being, and concentrate on the characters. Reilly has always done broad brush, larger than life, rather well, and here he has a gutsy lead in the form of Dr Cassandra ‘CJ’ Cameron, a reptiles expert with an unorthodox past. Based on this outing, she’s clearly Superwoman’s long-lost twin sister.

The blokes fare less well. CJ’s accompanied by her faintly annoying photographer brother Hamish, whose only personality trait appears to be that he likes keeping the freebies from hotels. There’s an enigmatic aide in the party, some arrogant media sorts, and a handful of moustache-twirling baddies. Oh, and a cute kid.

Once you get past an information dump early on in the form of a convenient New York Times reporter, it’s high-octane action until the end. Your mileage will vary about said ending – I refer you to my eye-rolling comment above. Others will enjoy the manic ride in what is the perfect example of a switch your brain off,  escapist thriller

I don’t know if Reilly has his eye on a movie deal, with critters to rival Jurassic Park. Disney big cheeses are probably having raptures over those closing scenes … Just think of the merchandising possibilites.