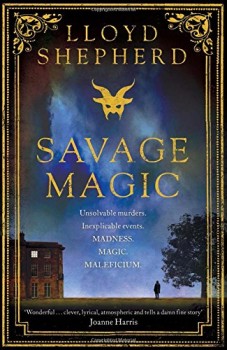 Lloyd Shepherd successfully continues his loose series blending horror with historical ‘faction’ – some of the characters, if not their actions, are real – with a dark and often disturbing wallow in the gutters of Georgian London.

At the heart of the story, Constable Charles Horton returns, tasked with solving a series of inexplicable killings of depraved aristocrats. But Horton’s mind is focused elsewhere – his wife Abigail has committed herself to a madhouse to escape the apparition of a ‘Pacific princess’ who haunts her daily life.

Bow Street magistrate Aaron Graham has also lost his wife, who has taken their daughter and is living with her cousin and presumed lover, a notorious society rake. Graham, acknowledging his debt to Horton from their earlier association, is funding Abigail’s treatment, but enlists the constable’s help when his own wife reports strange and apparently supernatural happenings at her new home.

While Horton tries to make sense of the stories of superstitious servants and villagers in darkest Surrey – just a day’s ride, but many years away from the glittering city where wealth, depravity and corruption go hand-in-hand with misery, prostitution and abject poverty – Graham must deal with a growing series of the most brutal murders of rich and titled men, all members of a sordid sex club, all found wearing its symbol, a satyr mask.

Linking these and at the heart of the story, are Abigail’s experiences in the asylum as she struggles to deal with her own demons and cope with the attentions of an inadequate doctor, whose journal, written after the events of the book, provides an interesting commentary of the shortcomings of psychiatric medicine at the time.

She becomes fascinated by the straitjacketed girl in the cell next to her own, hearing her night-time conversations – although her door is always locked – and terrified by her apparent ability to control men’s minds to the extent male inmates scream through the night.

Much of the book is a biting social condemnation of the treatment of women in the early 19th century as well as the glaring inequalities of society. The witchcraft sections are perhaps the weakest link – there’s enough evil in the story – but provide the opportunity for some unconscious humour with several pompous men insisting: “There’s no such thing. We’ve abolished it by Act of Parliament.”

Shepherd’s scenes, particularly those in class-ridden London, have real atmosphere and richness, and his clever use of period language not only adds historical authenticity but also engages the reader’s intelligence in this rich and savage story which continues the themes of The English Monster and The Poisoned Island.

Savage Magic is dark and atmospheric, and the narrative moves swiftly and fluidly to a powerful and shocking conclusion. It’s a clever and well-written thriller which will encourage you to re-examine your own views of a country poised to enter what historians have come to regard as its golden age.