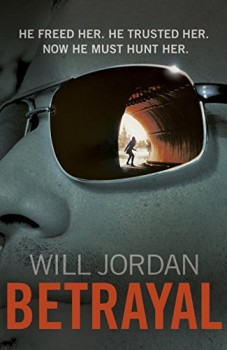 When a sniper ambushes a motorcade of Russian security force members, Ryan Drake has to decide how far he’ll go to protect Anya, the woman he once had to break out of a top security prison.

Ryan Drake, ex-UK Special Forces, is now working for the CIA as the leader of a Shepherd team, a covert unit authorised to use any means to get their highly specialised search and retrieval jobs done. Drake’s tough and ruthless, but one person has thoroughly got under his skin: Anya, the woman he had to break out of a top security prison in Will Jordan’s first book, Redemption.

Drake crossed paths with her again in Sacrificed, and at the time, I expressed the hope that Jordon didn’t get too involved in the star-crossed lovers trope. There were times in Betrayal that I thought he was getting dangerously close to crossing that line, as Drake seemed to steadfastly refuse to believe Anya was capable of doing any wrong, even when the evidence was quite clearly to the contrary. But I was pleased to see Drake’s third outing remain firmly in thriller territory.

The many-layered plot sees Drake and a small team of friends and associates in pursuit of a bunch of very ruthless killers responsible for shooting up a motorcade of Russian Federal Security Force members on a diplomatic mission to Washington DC. One of them is kidnapped and brutally tortured and several more are killed.

Drake receives a mysterious text message that he presumes comes from Anya, and this puts him at the heart of the search for the killers and the reason behind the crimes. With him is Cole Mason, an ex-member of Drake’s Shepherd team who’s just been thrown out of the unit after failing a tough series of tests designed to gauge his operation fitness. But when Drake starts to operate on the wrong side of the tracks, beggars can’t be choosers and Mason is desperate to gain a second chance, even if you wouldn’t always know it from his abrasive attitude.

Betrayal keeps up Jordan’s familiar fast pace as Drake’s investigations take him into the heart of Russia, dragging some unlikely allies along for the ride. It’s good to see a male thriller writer who can handle female characters, and there’s a welcome return for gutsy IT specialist Keira Frost. Drake’s compulsion to think the best of Anya, the woman he spends much of the book pursuing, comes very close to being his undoing. But the glimpses of Anya’s back story went some way to swinging my sympathy in her direction.

Betrayal twists and turns through an intricate plot with style and realism and provides a good enough entry point to the series for anyone who hasn’t previously made Ryan Drake’s acquaintance. If you like your thrillers fast, complex and realistic, you’ll feel at home here.