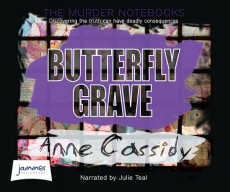 When Joshua’s uncle is injured in a fall, Rose and Skeggsie accompany him to Newcastle, but Joshua is certain they’re being followed. Is there a connection with the mysterious disappearance of his father and Rose’s mother?

When Joshua and Rose’s parents disappeared without trace five years ago, they were split up as their parents hadn’t been married and they weren’t blood relatives. Joshua went to live with his uncle in Newcastle upon Tyne and Rose moved in with her grandmother in London. Five years later, they met up again and began to look more closely at the disappearance of their parents, aided and abetted by Joshua’s friend, the techno-savvy loner, Skeggsie.

When Joshua’s uncle is injured in a fall from a cliff path, Joshua feels guilty for not having been home for a while and is determined to go back to Newcastle to be there for him. Rose and Skeggie don’t want him to be alone in an empty house for Christmas and insist on going with him. On their way north, Joshua is convinced they’re being followed and the teenagers wonder if this has something to do with their investigations into the disappearance of their parents, both of whom were undercover cops.

When Skeggie starts to investigate the vehicle Joshua thinks is following them, the three friends become ensnared in a complex series of events that will come back to bite them in a big way. Joshua is still determined to unravel the secrets of the enigmatic notebooks that he’s certain hold the clues to his dad’s disappearance. And matters become even more complex when his uncle’s involvement in the killing of a suspected murderer comes to light, bringing with it more links to the mysterious theme of butterflies that seems determined to dog their footsteps.

Anne Cassidy certainly puts her teenage protagonists through the mill in Butterfly Grave and doesn’t shy away from some very difficult issues. Joshua and Rose have to cope with some murky revelations that threaten everything they’ve ever believed in, and Julie Teal’s narration adds clarity and depth to the characters’ emotions. She has a good range of voices, switching with apparent ease between male and female, and is equally at home with young or old.

There’s a dark tragedy at the heart of this story that come completely out of left field, but the story is none the worse for it. Both Joshua and Rose do a lot of growing up in the course of Butterfly Grave and at the end, I’m simply not sure whether we’ll be seeing more of them or not, but I hope so. Anne Cassidy’s teenagers will burrow under your skin, leaving you wanting more.