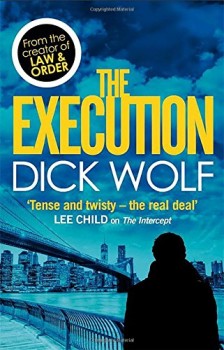 Jeremy Fisk of the NYPD Intelligence Division has to work with Cecilia Garza, his opposite number in Mexico, to counter a threat to Mexico’s newly-appointed president on a visit to the US.

Detective Jeremy Fisk of the NYPD Intelligence Division had his first outing in Dick Wolf’s clever, fast-paced debut, The Intercept. Fisk is back, doing his best to get to the bottom of a potential security threat surrounding the visit of the newly-elected Mexican president to New York.

After kicking off with some rather random action showing Fisk at work against some topical but seemingly rather random Swedish jihadists coming into the US over the Canadian border, The Execution lives up to its name and switches focus to some brutal cartel violence in Mexico.

Twenty three people have been murdered in Nuevo Laredo, a small town near the US border. Only one person escapes the massacre, and in a chilling exchange, it’s clear that the local chief of police is seriously considering making sure the injured man doesn’t survive long enough to become an inconvenience. That way, he can avoid a confrontation with the powerful Zeta cartel. Fortunately for the survivor, Detective Cecilia Garza of the Mexican intelligence agency turns up and takes charge.

Garza recognises the handiwork of Chuparosa, a killer she’s been pursuing for years, and is determined to get to the bottom of why he’s left behind a large number of beheaded, mutilated corpses. The trail eventually leads Garza to New York as part of President Vargas’ protection detail, and when more decapitated bodies are found on a beach, it’s clear to her that the assassin has his sights on a very big target.

Wolf writes with the easy competence of an experienced screenwriter. He’s the creator of the long-running Law & Order series, and that background is very evident in the cinematic action and descriptions. Where he falls down slightly is not getting close enough to his subjects for them to forge any real connection with the reader.

Fisk is a little deeper than he was in the first book, as he struggles to come to terms with the death of a woman colleague he was close to, and that will no doubt have more resonance with anyone who has read The Intercept. As for Garza, dubbed The Ice Queen by those who’ve worked with her, Wolf is somewhat guilty of not following the ‘show not tell’ rule, as there’s a fair bit of tell and not an awful amount of show where she’s concerned. But despite that reservation, Wolf competently handles the familiar trope of antagonists reluctantly working together, and makes the partnership of Fisk and Garza eminently readable.

The Execution is a good, solid thriller that keeps the pages turning and holds interest to the end, managing to throw a few surprises in along the way.