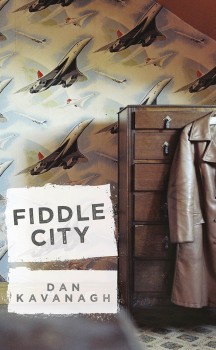 Ex-copper Duffy is hired to get to the bottom of a series of thefts in Heathrow Airport, otherwise known as Fiddle City.

For anyone who’s ever flown out of one of the country’s busiest airports, Fiddle City will very definitely strike a chord, if you’ll excuse the bad pun. Heathrow is almost unimaginably huge, even in the 1980s, when Dan Kavanagh’s Duffy series first landed on the shelves, almost a city within a city, with its thousands of workers and businesses operating out of the vast complex.

Duffy, a bisexual ex-copper, gets offered a job by Roy Hendricks, following an amusing encounter in a gay bar with a friend of his where Duffy’s attempts to pull a one-night stand go unfortunately awry. Hendricks is fed up of getting it in the neck from his customers when their freight goods go astray in transit. One of his employees has just been badly injured in a crash on the M4, so there’s a vacancy for Duffy.

It becomes clear pretty quickly that someone is on the fiddle when a wodge of cash appears in Duffy’s locker, but from then on he struggles to unearth who is doing the ripping off and how, even with the help of a delightfully downbeat seen-it-all-before airport security man, with his fund of war stories.

Duffy is a great character from the start, and that impression doesn’t lessen. He’s obsessed with cleanliness, can’t stand anything ticking in the bedroom, so before anyone makes it as far as his bed they have to deposit their watch in a box in the bathroom. His attitude to sex is pretty casual, but for me, the stand-out scene was his foray into the darker recesses of a topless bar for information on his case. Kavanagh’s humour is pretty basic, but none the worse for that, and the 1980s setting is barely noticeable, marked mainly by the use of telephone boxes instead of mobiles, and the lack of any mention of the M25.

Kavanagh pulls of a very distinctive voice in the narrative, even though the book isn’t a first-person narrative from the main character. It’s fluid, easy reading, with a sense of fun, but more than a hint of darkness within. The violence is shocking but never outrageous, and it’s very hard not to like Duffy, for all his tendency to regard rules as things to be swiftly disposed of.

My only quibble, and this is one where everyone’s mileage will vary, is the fact that Dan Kavanagh is actually a pseudonym of Julian Barnes, and I always end up feeling faintly cheated by the fake biographies on the dust jackets in cases like this. But that shouldn’t detract from some great writing, and it hasn’t stopped me adding the next book to my already tottering reading pile.