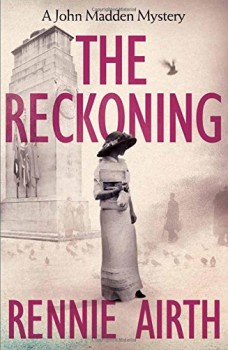 A retired banker goes fishing and is shot dead for no apparent reason.  When others die in the same way it becomes obvious that there must be a reason and that the killings are connected.

Perhaps it is a little early in the year to recommend a book to be read on the beach, but if ever a book were designed for that purpose this is it. On holiday, people want to escape from the cares of the world and an essential characteristic of the beach book is that it should be undemanding. This one fits the bill perfectly.

Many thrillers/mysteries can require a certain amount of backtracking on the part of the reader to refresh their memory on a piece of the plot or to remind themselves how a particular character fits into the narrative. None of that is required here, the characters being few and the plot perfectly simple and straightforward. However, this is a book that the reader won’t want to put down.

Oswald Gibson thought of himself as something of a doormat and it was, perhaps for that reason that, in spite of spending all of his life working for a bank, he had never risen any higher than assistant manager. The person who wiped her feet on him had been his wife, Mildred. Fortunately – and this is how he feels – she had died a year before and since he is now retired, he can indulge himself in his favourite hobby of fishing. On this particular day, however, his fishing is interrupted when a figure that he sees only as a shadow against the setting sun puts a gun to the back of his neck and shoots him. The person responsible than disappears.

When it transpires that a similar unexplained murder has occurred in Scotland the case becomes one for detective Billy Styles of Scotland Yard. It transpires that, a few days before his murder, Gibson had had a mysterious visitor, as a result of which he had begun, but not finished, a letter in which he mentioned a Scotland Yard detective by the name of Madden – Billy Styles’s former boss. John Madden, now retired, becomes at Billy’s request an informal investigator in the case. It is soon clear that his expertise will certainly be required when a third murder, under almost exactly the same circumstances, occurs in Oxford.

It is now quite beyond doubt that the same person is responsible for all three murders and the first task is to discover what the three men had in common. At this point the book becomes very much a police procedural and it is only gradually that the reason for the murders begins to come clear. Even when it does there still remains the task of finding out who the culprit was. The eventual recognition of a motive and the unmasking of the murderer are handled very convincingly, with a number of twists along the way, including a particularly surprising one when everything appears to have become clear.

There are some modern crime writers who insist on placing their stories in a social setting – something which, where it is well done, can help in providing authenticity. This is not the case with The Reckoning. The story is set immediately after the end of the Second World War but there is no attempt to describe the rationing, the shortages, the ‘utility’ furniture, the bomb damage or the frequent disruption of family life following the loss of loved ones. The senior police officers are all very middle class and appear quite unaffected by the very trying conditions under which the majority of the population lived. In other words, The Reckoning is pure escapism, but in this case that is not a dirty word. It is very skilfully written and keeps us in suspense until the very end.