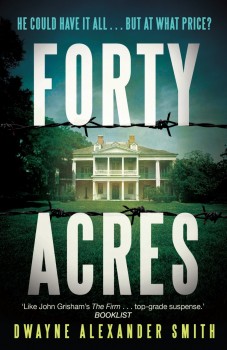 Rising lawyer Martin Grey comes to the notice of a group of black powerbrokers. They invite him to join them, but when he visits their secretive headquarters he discovers an alternative world which challenges to most deeply held beliefs.

Dwayne Alexander Smith’s debut opens as almost a traditional legal thriller, but explodes in to a clever chiller which gives a whole new definition to the concept of Black Power – and not only seriously addresses the issue of race in America, but also poses a series of questions about class, inequality and the corrupting power of enormous wealth.

Rising young New York lawyer Martin Grey relies on his beliefs to win a multi-million dollar corporate discrimination case against an internationally renowned trial lawyer. That victory catapults his struggling practice into the top legal bracket and brings him to the attention of a secretive group of black wheeler-dealers, all fabulously wealthy captains of their respective industries and professions.

He is at first flattered to be invited to join their secretive group at the Forty Acres of the title – the amount of land allocated to former slaves. Once there he begins to realise that he is being co-opted into a conspiracy led by a vengeful guru to redress the historical wrongs perpetrated on America’s blacks.

Grey’s moral strength and physical courage are tested to the full as his whole world and the lives of his wife and also his Jewish business partner are put on the line. To reveal more would destroy the plot of what is a relevant and pertinent thriller which basically revolves around one moral question. Can terrible crimes committed in the past justify similarly vengeful atrocities more than a century and a half later?

Smith’s descriptions of the alternative world of Forty Acres and its inhabitants are both convincing and compelling. His narrative almost rattles along and the dialogue between the main characters is realistic and natural.

If there is a weakness in what is a thoroughly engaging and thought-provoking story, the ending appears a little rushed and stretches the credibility of what has gone before. But that letdown is offset by a sinister last couple of sentences.

This is a serious subject, given serious treatment and highly recommended for readers who want their imagination and consciences exercised. Forty Acres is a fine thriller, which not only thrills, but also raises some very real moral conundrums. It’s a wonderful debut – one I suspect which may well catch Hollywood’s eye.