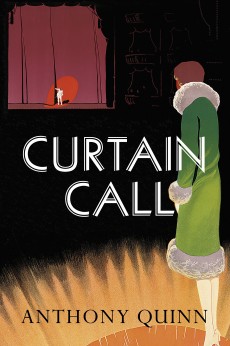 London 1936. There are Blackshirts on the streets and a murderer terrorising women. Actress Nina Land is in the wrong place at the wrong time – and realises she may be the only person to have seen the killer’s face.

I must have had my brain in neutral when I read the blurb for this book – I assumed blithely it was a re-issue of a 1930s novel written by the actor Anthony Quinn. Um, no. It’s a new book from the pen of a journalist on the Independent. And a star turn it is as well.

It’s 1936 and there are Blackshirts on the streets of London and rumours of war abound. And there’s also a killer at large who has a nasty way about him with a tie-pin. Theatre actress Nina Land accidently interrupts him in a hotel room. She’s not at all keen to go to the police, as she shouldn’t have been in the hotel in the first place, and definitely not consorting with a married man … But she realises she may be the only person to have seen his face.

Elsewhere on the streets, ageing theatre critic Jimmy Erskine is pushing his luck with clandestine encounters with young men. He’s the big name among the West End reviewers, but is worried that his time might be up. His loyal personal assistant Tom is getting restless, and has secrets of his own. And Tom has met the enigmatic Madeleine Farewell, a young woman who has good reason to believe that the killer is after her.

Curtain Call is very much character-driven fiction, and at times the murder lurks in the background. I hasten to add that this isn’t a problem, as the novel spans a hot summer where, realistically, a murder enquiry would fade on and off the front pages.

Quinn’s prose is sharp and he conjures up atmospheric settings seemingly effortlessly (which of course probably means he sweated blood over them!) The book takes in theatres, scruffy boarding houses, posh restaurants, spit and sawdust pubs, exclusive clubs and even a drag ball, which is quite possibly the stand-out scene in the book.

Politics and sexuality loom large, but Quinn is never heavy-handed – and he writes some truly memorable scenes around those issues. And he juggles his cast adeptly. Nina, Jimmy, Tom, Madeleine and society portrait painter Stephen Wyley are all presented dispassionately and even-handedly. They’re nuanced, too, particularly Jimmy and Stephen, who could easily have been portrayed solely as obnoxious or weak men respectively. There’s a stellar supporting cast as well, including Nina’s selfish mother, a self-sacrificing gay doctor, and a Jewish musician living in poverty.

Quinn rejects easy answers when it comes to that complicated topic of love – although, in weaker hands, the ending may have come across as rather too pat. But some tense scenes late on do the murder mystery justice. And it’s only when you finish the book that you realise how much was going on beneath that deceptively straightforward story.

Curtain Call is a virtuoso performance from start to finish. Bravo, Mr Quinn. You deserve a standing ovation and flowers strewn at your shapely feet!