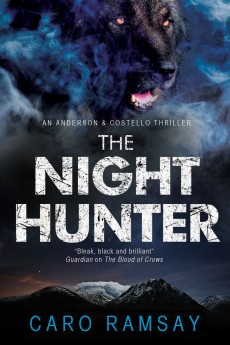 Elvie McCulloch’s sister disappeared while out for a run. When a woman who disappeared in similar circumstances turns up dead in dramatic circumstances, Elvie starts to fear the worst for Sophie.

I know I’ve said it before, but I’m really not a fan of prologues, especially when it’s hard to see, even at the end, which part of the story it fits into. The beginning of The Night Hunter falls squarely into that category, especially when I went back and re-read it at the end of the book and was still none the wiser.

But fortunately, I’ve got into the habit of skimming quickly over prologues now and only taking a second look if it looks like I’m going to get past the first ten pages. Otherwise I might not have hung around to make the acquaintance of main character Elvie McCulloch, one of the freshest and most original narrators I’ve come across since the protagonist in Belinda Bauer’s Rubbernecker.

Elvie is struggling to cope with the loss of her sister Sophie, who went out running eight weeks ago but never returned. As Sophie took money with her, the police believe she planned her own disappearance, so she hasn’t made it onto the missing persons’ list. The smart money is on the theory that she’s run off with Mark Laidlaw, a married man, and even Elvie – full name Elvira, her dad was an Elvis fan – believed that to start with. But when a dead woman hurtles to her death at night from a cliff above a remote Scottish road, Elvie starts to question that belief.

Elvie sees the immediate aftermath of the dead woman – naked and with the marks of shackles on her body – landing on top of a car. She tries to help, but the woman is too badly injured. A bizarre death is made even more strange by the fact that Elvie recognises the dead woman. Her name is Lorna Lennox and she disappeared in similar circumstances to Elvie’s sister.

By that point in the book, I was well and truly hooked. Elvie is a strong narrator, and the present tense works well. I might even be getting close to overcoming my aversion to it, although my dislike of prologues is still as strong as ever. Elvie is disconcertingly direct and takes no prisoners in her dealings with others, as the somewhat bemused duo of DI Colin Anderson and DS Freddie Costello soon find out.

In The Night Hunter, Caro Ramsay has taken the intriguing step of showing us the police side of her stories through the eyes of someone else, and it works, bringing a fresh slant to her series and allows her to step outside the well-worn path of most crime procedurals. Elvie is undoubtedly the star of a clever, well-constructed and decidedly gripping story.

Her characters come quickly to life. Overweight, foul-mouthed former cop-turned-PI Billy Hopkirk is a delight, although his eating habits aren’t for anyone of a delicate disposition! Elvie’s mum has turned to alcohol to help with the pain of her daughter’s disappearance and her harassed boyfriend Grant is doing his best to keep up a semblance of normality, even though they’re all starting to look very much like they’re making an appearance on the Jeremy Kyle Show.

The story moves on at a rapid pace as more of what Elvie knows starts to surface. This is a clever, gripping read, with as many twists and turns as the Scottish roads that all play their own part in the story.