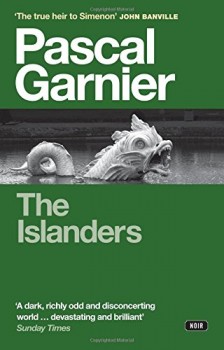 After a separation of quarter of a century, Olivier and Jeanne resume their occupation of the island, a notional refuge and the only place offering the pair contentment. But a death is only the start of a series of nightmarish events.

On the death of his mother, Olivier reluctantly returns to Versailles for the burial and disposal of her effects. He has not been back to the town since his departure 25 years previously; after a period of alcohol abuse and detox he married and has been living a life of abstinence and listlessness in Nice. Although anxious to evade past associations, he is trapped in Versailles by the cold weather over the Christmas holiday season.

Seeking a phone book he calls on the flat opposite his mother’s, and by chance is re-united with Jeanne. Olivier and Jeanne were inseparable as children and shared a world all their own. When a child was kidnapped and killed, suspicion fell on the pair and although the guilt was assigned elsewhere, they were parted and have had no contact since. Like Olivier, Jeanne has fallen into lethargy since that time, but is re-animated by the reunion.

Jeanne lives with her brother Rodolphe, a blind gluttonous misanthrope. Rodolphe picks up a drifter, Roland, and on being introduced to Olivier proposes a dinner for the four. A night of drunken excess follows, and when Olivier awakes he finds Roland, strangled, on his bathroom floor. The death is only the start of a nightmarish series of events.

This is a very powerful tale, told with such authority that it is entirely convincing. The two protagonists have been drifting since the events so long ago: with their meeting both abandon the meaningless pretence they have been living and resume their true life on the island of their imagining. This is no gentle paradise however, but a descent into the macabre.

Olivier downs bottles of spirits with abandon, and within a few weeks the alcohol has done such damage that he believes himself to be infested with insects. Jeanne is the one who takes the most dramatic steps to ensure that this time their alliance will not be broken. Together they depart reality to their island, seemingly the only place they can truly be themselves.

Although there are certainly plenty of crimes here, the book is better described as a series of psychological portraits. While this is primarily focussed on the two protagonists, several other characters are deftly described in brief outlines: Madeleine, the maid who lives downstairs, Luneau, the policeman, Rodolphe and Roland. The domestic concerns of the neighbours and shopkeepers provide a cosy counterpoint to the distressing events in Jeanne’s flat.

It is difficult to find a comparable for Garnier, although the bleak view of the human condition found in existentialist writers comes to mind. The writing is incisive and chilling, but I suspect that only true fans of noir are going to find this to their taste.