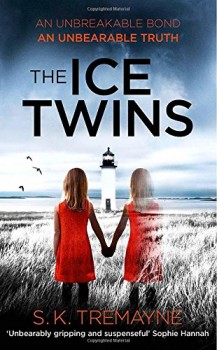 A year after one of Sarah Moorcroft’s twins died in a tragic accident, the horrible realisation dawns that she might have made a terrible mistake about the identity of the dead twin.

A year after one of her identical twin daughters died in a tragic accident, Sarah Moorcroft and her husband Angus are doing their best to rebuild their shattered lives, but it’s been an uphill struggle. Angus lost his job as an architect by punching his boss in a fit of anger and since then, money has been getting tighter and tighter.

When Angus is left a tiny, remote Scottish island as a legacy from his grandmother, they decide to make a fresh start away from London. Sarah is brimming with enthusiasm about the prospect of renovating the barely-habitable lighthouse keeper’s cottage on Torran Island, off the Isle of Skye, but her dream soon starts to take on a darker edge.

Their surviving daughter, Kirstie, who’s been very withdrawn since the death of her twin, Lydia, stuns her mother by announcing that she is Lydia, not Kirstie, opening for Sarah and Angus the nightmare prospect that they might have made a terrible mistake about the identity of their dead child. But the problem is that with monozygotic twins, there is no physical way of proving which twin is which, and anyway, Lydia was cremated, so there is no evidence left.

As Kirstie, who now insists on being called Lydia, tries to settle in at a new school, Sarah and her husband do their best to adjust to their lives as well, but as with most psychological thrillers, life takes an abrupt downhill journey much akin to a launch down a ski jump, with their lives soon in freefall. Kirstie fails to make friends at school and becomes increasingly withdrawn and disturbed. Angus has to spend longer times on the mainland for work, leaving Sarah struggling in a freezing cold wreck of a cottage, reliant on a small boat to get them on and off the island when the tide covers the treacherous mudflats that surround them.

The mudflats are a good metaphor for the book as a whole as Sarah and Angus flounder around, not knowing how to cope with their daughter’s shocking revelation. There are times when I wanted to shake most of the main characters, particularly the deplorable and unprofessional attitude of a psychiatrist that Sarah consults, in one of the least believable and most irritating parts of the book. But that criticism notwithstanding, this is a gripping read, harrowing in places and moving in others, which kept me awake at night while I ploughed on, wanting to scream at the characters almost as much as I wanted to know what came next.

SK Tremayne takes a great premise and manages to pull it off, telling the story from the perspectives of both Sarah and Angus, with Sarah’s story told in the first person, present tense for added immediacy and empathy, and Angus’ in third person past tense for a greater sense of detachment. Neither is entirely a wholly reliable narrator, but it’s hard to predict all the twists and turns of the plot development. My advice is not to even try. Just let yourself get caught up in a nightmare as bleak as a Scottish island in winter.