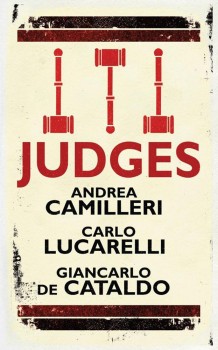 Three Italian judges in three different areas each have similar ideals and are differently equipped to achieve them. Will any of them ever succeed in overcoming the established criminal societies with their associated collaborators in the field of the law?

This unusual book consists of three contributions, one from each of three well-known Italian writers. Each has created a piece of fiction about a judge. Two of the three pieces give the impression of being the start of a novel whilst the third feels more like a short story in its own right. The thread that links them, other than the subject of judges, is the idea of hope, with the final story providing a real sense that a righteous judge might someday break the stranglehold of organised crime.

In the first piece Judge Surra arrives in Montelusa determined to set up an efficient, impartial, and transparent judiciary system after the bad practice of the past. But does he do anything to crack the criminal underbelly of the district? In the second piece The Bambina, a young, newly-qualified judge, inadvertently gets too close to the criminal underbelly of her new district with disastrous results – but at least she gets to understand the problem. In the third, Judge Mandati has nightmares about the bully he has known since he was a child, and who is now the corrupt mayor of his town. When Mandati, after many years, finally assembles a case against the bully it is his final attempt to bring him to justice – is there any hope of success?

Each section is readable and gripping but some are more complete in terms of a story than others. The first section begins to develop the character of Judge Surra in some depth with his confidence and his love of cannolis but then it suddenly stops. This one most of all feels like the start of a longer novel. The plot of the second is probably the most conventional with the story showing a young idealistic judge, just starting her career, who becomes inadvertently embedded for a while in the criminal underworld. She may or may not have the strength to be able to change the status quo of the legal system in the future – again, there is a rather abrupt ending but with a glimmer of hope. The final story whilst switching between dreams and reality is quite confusing but provides the most hope of all, ending with the start of a trial which appears to be about to mirror lessons learnt by judge Mandati as a child and thus perhaps to have a successful outcome.

This is a strange but enjoyable book which certainly showcases the high quality of the writing of these three authors – Andrea Camilleri, Carlo Lucarelli and Giancarlo de Cataldo – although the short story may not be the format by which they are best known. In addition, the book begins to provide a window onto the complicated relationship between traditional organised crime and the legal system in Italy – at least how it might have been in the past.