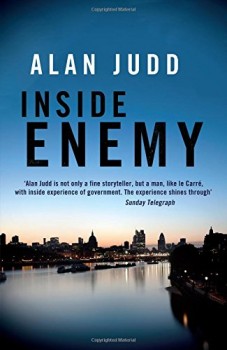 Charles Thoroughgood, the newly-appointed head of a revamped MI6, is presented almost immediately with the problem of cyber attacks on the UK.  At the same time one of his field agents is murdered and a former colleague who turned traitor escapes from prison.

The book begins with a prologue which jumps straight into the action. A man in his 40s, running what appears to be a failing business repairing clocks, goes through what is clearly a well-rehearsed routine leading to the assassination of a man living alone. Everything about the murder denotes someone who has done this sort of thing before and knows precisely how to go about it.

Meanwhile, Charles Thoroughgood has just turned up for what he expects to be a job interview with the foreign secretary, an old friend of his. He soon realises, however, that there is no serious intention to interview him and that the job – Head of MI6 – is his if he wants it. He does.

He is briefed about an item of concern to all three security services – what appear to be co-ordinated and systematic cyber attacks, causing IT and power failures, with all that they entail. A further worry is that a nuclear submarine appears to have gone missing, no communication having been received from it. As Charles begins to settle into the job he learns of the assassination of a former Russian agent of his, Viktor. He is informed also of the escape from prison of a traitor whom he had unmasked many years before, with the help of Viktor. The death of another former officer also involved in trapping the traitor convinces him that these events are related.

The situation seems to have been set up for the plot to involve the unravelling of the mystery of the IT problems and the missing submarine, but suddenly we are presented with a detailed back story involving the arrest and interviewing of the traitor. This causes the novel to lose momentum that it never really regains.

The author seems to be aware of this and seeks to grab the reader’s attention with the introduction of a beautiful Russian woman and her boss who play no important part in the novel at all. The explanation for the cyber attacks is unconvincing and there is no explanation at all for the missing submarine, which simply turns up out of the blue. The attempt to link these with the story of the traitor is laboured and rather far-fetched. In particular, the way in which the hostage is rescued from her kidnappers is very difficult to believe. Thus, the graphic realism of the prologue gives way to a rather sketchy plot and a less than thrilling conclusion.

Some of the difficulty is brought about by the lack of interesting, well-formed characters. The difficulty with the main character, Charles, is that we are told very little about him. This is part of that old problem associated with a series of books based on the same character. No doubt at some point during the series there was more detail of what sort of a man eventually achieves a position as head of MI6.  Clearly there is some nepotism involved but, even so, the new reader needs to know more about why Charles deserves such a position if his exploits are to be taken seriously.

All in all, what began as a novel which immediately gripped the reader’s attention gradually falls away. There is too much in the way of flashbacks, which leave the action limping along. Nor do the frequent discussions at a high level help to any degree when it is perfectly obvious from what we learn of Charles’s thoughts that he is always going to do precisely what he wants. Such discussions may well be routine within MI6 and the author seems to want to make us aware of his expert knowledge of what goes on. However, if the reality is as dull as some of these scenes tend to indicate, then realism is best avoided. When a little more realism is required to bring the plot to a conclusion it is sadly lacking and the ending is at best melodramatic and at worst completely unbelievable.