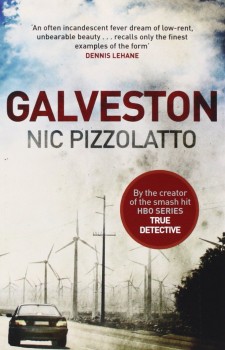 Gangland enforcer Roy Cady has been sentenced to death twice – by cancer and by his own boss. He escapes a murder set-up, rescues a young prostitute and the pair, together with her little ‘sister’, go on the run from New Orleans through Louisiana and Texas.

Roy Cady is not a nice man – he’s a brutal enforcer for a loan shark, killer when necessary, drunkard with a self-erased past and no future. Diagnosed with terminal cancer, he is then set up over a woman by his own boss, but somehow survives a deadly shoot-out.

There is one other survivor – a young prostitute. Together they go on the run from New Orleans to Galveston, picking up her young ‘sister’, and drifting through a series of sleazy bars and hotels from Louisiana to Texas. Somewhere during their journey Cady discovers there is another man he might have been under different circumstances. But is this discovery too late?

From the creator of the hit HBO series True Detective comes a superb first novel, downbeat, dark and reeking of the seamier side of America’s south. Pizzolatto switches between past and present with effortless ease, capturing the desperate vulnerability and waste of those destined to be permanently outside the boundaries of normal society.

It’s brutal, vicious and incredibly sad – a tight mini-masterpiece of noir which shines a cold spotlight on the crippled would-bes and the even more broken never-weres who inhabit the aimless and hopeless world of the fringes. Yet as Cady tells his almost unbelievably gruesome story without a trace of pity, or self-pity, he begins to recognise shades of decency, hope and humanity in others – and surprisingly in himself. But like so many of life’s big losers, his one attempt to do the right thing by someone else, backfires disastrously.

Gripping, brilliant, at times bleakly poetic with its underlying theme of redemption, with starkly drawn characters and devastating real dialogue and backgrounds, this is hardly a ‘crime novel’ as such, but one which should earn Pizzolatto international recognition as a novelist.