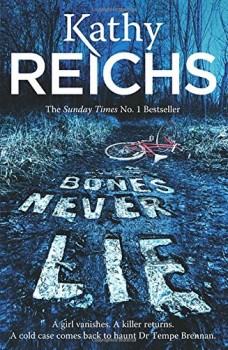 Forensic scientist Temperance Brennan is called in to assist with a cold case investigation, and learns that DNA from a recent case links it to Anique Pomerleau, an old adversary.

When Temperance Brennan is called in to assist on a cold case investigation in Charlotte, she is shocked to hear that DNA recovered from the victim apparently comes from an old adversary, Anique Pomerleau. Back in Montreal, Pomerleau kept young girls imprisoned, raped and tortured them and she was last seen escaping from a burning house, leaving Tempe trapped and unconscious.

Two young teenage girls have been abducted in broad daylight, one in Vermont and one in Charlotte. There are many similarities between the cases, and Pomerleau’s DNA has been identified from both. A task force has been set up, including Tempe, a detective from Vermont called Umparo Rodas, Charlotte detective Erskine Slidell and Sûreté du Québec detective Andrew Ryan. Unfortunately, Ryan has not been seen since the death from a heroin overdose of his daughter, so Tempe sets out to track him down.

To solve the case, the team must track Pomerleau’s movements after her escape from Montreal, but a shocking discovery puts them onto a completely different, chilling track.

This book brings together both of Tempe’s detective partners, Andrew Ryan from Montreal and Erskine ‘Skinny’ Slidell in Charlotte. Luckily, they seem to get on well together. It also introduces Tempe’s mother as an active character and explores the relationship between mother and daughter. The stories of Tempe’s relationships with the various law enforcement professionals, with her extended family, and even with her pets, always bring the books to life and make her characters more three-dimensional. They also provide a refreshing counterpoint to the grimmer aspects of murders, post-mortem examinations and forensic investigations that otherwise dominate the books.

It is sometimes necessary to suspend disbelief as Tempe goes off to chase suspects on her own, something she seems to do at least once per book but no forensic scientist would ever do in real life. This time, at least, she manages to avoid getting captured or injured and has help to make the arrest.

Bones Never Lie is an interesting exploration of the long-term aftermath of crime, and is another great read for Brennan fans. The question is, will Tempe and Ryan ever get together?