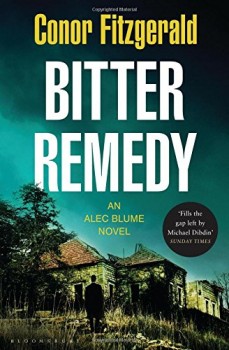 Commissioner Alec Blume takes a break with a course on Bach Flower Remedies in Monterozzo, but the discovery that he is a policeman from Rome stirs up some activity related to cases of missing persons.

Commissioner Alex Blume’s stay in Monterozzo looks likely to be a short one when the course on Bach Flower Remedies he is on is cancelled on his arrival. But a medical emergency consigns him to the local hospital, and then problems with his car deny him escape for several days. Niki, the boyfriend of the course organiser Silvana, asks him to look into the disappearance of Alina, one of the girls who works in his club, and despite reservations, Blume starts digging.

Alternate chapters relate the history of Alina, and her friend Nadia, Romanian girls sold into prostitution in Istambul, who escaped to Italy by daring and sheer grit. When Blume hears that Alina was having an affair with Niki, clearly a man with criminal connections, he suspects him of disposing of her. Research reveals that Silvana’s mother also disappeared together with her boyfriend many years ago, and here again Blume thinks a crime was committed - by Silvana’s father Greco. Whatever the truth, the answer to these mysteries is tied up with the decrepit Villa Romanelli, where Greco tends the gardens, and Silvana blends her potions.

Blume is of the dysfunctional school of detectives, with problems which he tackles, or possibly aggravates, with random doses of prescription medication. He has great difficulty with personal communication, and is living apart from his daughter Alessia and her mother Caterina. Caterina finds Blume’s peculiar behaviour and inconsistency of contact exasperating but continues to provide practical assistance, without which Blume would be in a sorry state.

Luckily for Blume, he generally seems to find people who are willing to overlook his foibles, even in an isolated village, and as well as providing a suitable foil for the protagonist, these are interesting characters: the admiring Dr Bernardini, the sleepy local police Maresciallo, the phlegmatic garage owner Alfredo and the aged Princess Flavia, who puts him up. Despite his handicaps, Blume is driven to explore the background to the disappearances, and is eventually able to get answers.

This is the fifth outing for Commissioner Blume, and although his problems seem to get worse, if anything, the author has injected more humour than was evident than in some earlier books. He also seems to enjoy setting false trails for the reader where not everything is necessarily enemy action.

Whether the story here could conceivably be said to bear any relation to real police work in Italy, or indeed anywhere, is perhaps beside the point. The success of Alec Blume seems to demonstrate that the entertainment value is widely appreciated, and the character something of a classic.