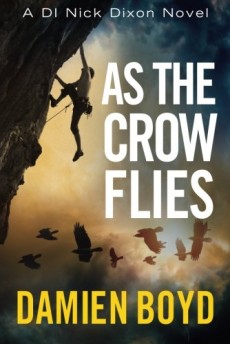 As the Crow Flies

DI Nick Dixon has moved back to Somerset from the Met – and finds himself investigating the death of an old climbing friend who wasn’t all that he seemed.

DI Nick Dixon has moved from the Metropolitan Police in London to the quieter world of Somerset. But if he was banking on spending his time in rural pubs, with a few burglaries and sheep-rustling to keep him occupied at work, he’s come to the wrong place.

Jake Fayter has died in a climbing accident in Cheddar Gorge. He and Nick were friends and climbing partners years back, and Nick promises Jake’s parents he’ll make some enquiries into what appears to be a tragic accident. Meanwhile, he’s trying to find out who’s turning over the houses of recently-deceased people, so he has to keep his sleuthing into Jake’s death off the radar for a bit. But it turns out that Jake has some secrets. How come someone who did casual jobs for cash swanned around in a £20,000 car?

As the Crow Flies is a perfectly serviceable mystery that toddles along from A to Z via B, C , D … Nick isn’t averse to bending the rules a bit, but it’s low-key stuff until he goes seriously off-piste at the end to lure the murderer out. Boyd doesn’t try anything fancy, either with his writing or plotting. So it’s a quick and easy read, as Nick and his sidekick, DC Jane Winter, pootle around Somerset asking questions and sampling the local pubs.

And there’s the problem – the characterisation is thin, to put it mildly. All we find out about Dixon is that he’s a former climber, trained as a lawyer before joining the police (much to his parents’ displeasure), has been awarded a medal at some point in his career and is diabetic. And he asks Jane out early in the book. To say she makes no impression whatsoever is also putting it mildly. DCI Lewis and the other cops pass by, fluttering lightly in the wind.

It’s not often that you wish an author had taken a bit more time to pad a book out. Boyd’s got a good setting and some promising characters – but he could have done so much more with them. An extra 40 or 50 pages might have made the difference between an entertaining but slight book, and a well-rounded mystery.