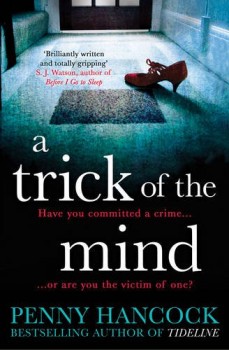 A Trick of the Mind

Ellie is convinced she’s been responsible for a hit and run accident and is determined to make amends, but her decision to become involved with the victim has far-reaching consequences.

Ellie has a lot on her mind as she drives down to the cottage in Southwold she’s recent inherited from her aunt May. She’s just broken off her relationship with her boyfriend, Finn, believing he’s been holding her back from reaching her true potential as an artist. Some of her paintings are going on show at a local gallery and it represents a big opportunity for her and, to top it all, her mother wants her to sell the cottage and won’t seem to accept that it’s Ellie’s property, not hers.

So when the car runs over something in the road, Ellie just keeps driving, trying to convince herself that it was only a branch that she’d hit. But during the evening with the friends who’ve come down to the private viewing at the gallery, doubts start to creep in. There’s blood on her dress and it seems to have come off the broken wing mirror on her car and, to make matters worse, there are reports on the local news of a hit and run accident which has left a man injured in hospital.

Ellie goes back out to the deserted stretch of road where she felt the bump to her car. The area is festooned with crime scene tape and Ellie becomes convinced that she has run someone over. But instead of going to the police, she seeks out the victim in hospital and is horrified to discover that he’s lost one leg below the knee. Patrick has amnesia and mistakes her for the girlfriend he was going away with for a sailing weekend.

As the deception deepens, Ellie becomes more and more entangled with Patrick, tied to him by a complex web of emotions. But soon, Patrick is trying to control her life, and Ellie starts to become uneasy.

Penny Hancock has produced a slick, well-paced psychological thriller that gets its hooks into you and doesn’t let go, despite a somewhat dodgy central premise that never quite manages to convince. Ellie, an obsessive/compulsive teacher who paints in her spare time, isn’t the most likeable character, but it’s not her constant need to perform little rituals designed to keep her and other safe that becomes annoying. It’s the way she gets herself in so deep with Patrick, throwing all commonsense to the four winds without any thought for the consequences of her actions.

There’s a horrible inevitability about much of the story, but not all of the plot twists are easy to spot, and there’s a couple of shiver-inducing moments as the book heads at speed towards a painful finale. If you can check your disbelief in at the door early on, A Trick of the Mind will certainly keep your attention. It’s an atmospheric thriller, with some genuinely creepy moments as Ellie’s life and work starts to unravel.