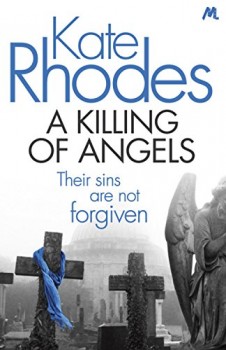 A Killing of Angels

Someone tucked a picture of an angel and a handful of white feathers into a banker’s pocket before pushing him in front of a Tube. It appears that a killer is stalking the Square Mile.

Someone is killing bankers. Many readers might think that was a public service – but from only one private bank and leaving a unmistakeable calling card, the classical picture of an avenging angel and a handful of white feathers with each body. Tortured psychologist Alice Quentin, after her earlier nightmare involvement with a police investigation, has sworn she will not become involved again, but when her old sparring partner, demoted and under pressure DI Don Burns appeals for help she allows herself to be dragged in.

Lecturer and poet Kate Rhodes’s second book is topical and ingenious. The prose is sharp, the characterisation realistic and believable and there is some first class misdirection – the basic requirements of any crime story. But her complex main character is often more interesting than the crime storyline itself. Alice is strong, convincing and well-constructed, but her harrowing history and ongoing personal, relationship and family problems – almost enough to fill two Scandi-crime volumes where angst is compulsory – sometimes detract from a pacey psychological thriller that exploits its London setting to the full and offers an atmospheric, clever and at times terrifying brutal read.

Alice and Burns enter a world of deceit, greed, outrageous behaviour and conspicuously extravagant consumption that is the banking heart of the City of London where money is literally more important than life. Running alongside this is a fascinating sub-plot of a seriously disturbed young man who has fixated on Alice and her own fear of commitment.

It almost seems unfair to criticise what is a very good and intensely enjoyable read, but could someone perhaps explain to an old crime reporter what police rank a DSI is? Or when the Met took to sacking detectives for failure to pursue an investigation in the proper manner? Return to uniform duties perhaps, even early retirement in the most severe and usually near-criminal cases, but a P45? Also, while most readers will love a shocking twist to the climax, this one seems to be carrying the principle of revenge just a little too far.

That said, Alice, with all her hang-ups, her smart and kooky friends, her fascinating professional life and her obsession with long distance running – what would Freud make of that? – looks set to be with us for a long time to come. It would be a great shame if she ever took the advice in the Gospel of St Luke: ‘Physician heal thyself’ and deprived readers of a fascinating, compelling and intensely enjoyable character.