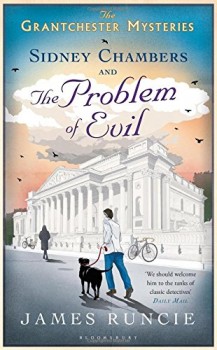 Sidney Chambers and the Problem of Evil

Some critics have favourably compared Canon Sidney Chambers to the legendary religious detective Father Brown, but to my mind that is a false pairing. And certainly the Anglican priest is no relation at all to the greatest of the lot – Eco’s fiercely intelligent and active Brother William in the finest of all the stories in this genre, The Name Of The Rose.

There’s no doubt that Chambers is a good man. But like the Church of England under the author’s father, the late Archbishop of Canterbury, he suffers under the burden of being inoffensive, indecisive and ultimately ineffective.

There’s none of the certainty of the two Catholics. However much they pondered, at some stage both were capable of swift action. The introspective Chambers spends so much time navel-gazing at his own motivations or debating theological points that there is never any rush or hurry, with everything sorted out in a heavily understated way in ‘the fullness of time’.

As in the earlier books, this third in the Grantchester Mystery series contains four or five longish short stories – none of which carry enough weight for a full-length novel. The series will eventually be spread over a 30-year period and as we reach the 1960s, ITV has started showing the series, starring James Norton as Chambers and – a perfect bit of typecasting – Robson Green as ‘Geordie’ Keating, his friend and the local DI, particularly dense even by constabulary standards at the time!

Sidney is newly and happily married to his German bride Hildegard and hoping to lead a quiet life. But his marital bliss is disturbed by a killer ever so mannerly targeting clergymen; the appearance of a beautiful naked French girl and disappearance of a valuable painting; a drowning on a film set which is not an accident and a baby stolen from a hospital.

References to the Beatles, President Kennedy, conceptual art and the CND movement place and establish the stories clearly amid the happenings of the period. The various plots are well constructed and the writing is excellent with some gentle humour off-setting occasional social comment.

Racism and then still pervasive anti-German feeling both get a low-key airing and overall the characters, mainly educated, middle-class, middle-of-the-road Socialists – the ideal CofE congregation – are well drawn. Even the less likeable ones have some saving graces.

This collection of gentle crime stories is an ideal read for a Lazy Sunday Afternoon to quote The Kinks, but the series is in danger of becoming bogged down with rather too much theology and too little detection.

Sidney Chambers is developing nicely as a character but needs a little less of a slightly patronising attitude – albeit an attitude common in ministers of all persuasions – and a little more positivity if he is to survive and prosper in his calling, his personal life and his detective work in the harsher and more go-getting 1970s and 80s.