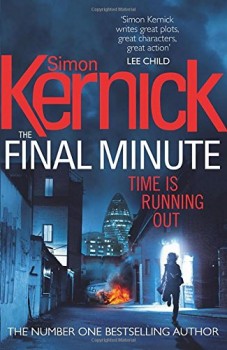 Matt Barron has lost his memory in a car accident but he’s not sure if the people who are meant to be helping him can really be trusted, and when his past does start to catch up with him, nothing is quite what it seems.

Unreliable narrators are a staple of crime fiction, and narrators don’t get more unreliable than someone who has lost all memories of their past life.

Matt Barron was nearly killed in a car accident. He’s lost his memory and is convalescing in a remote house in Wales, being looked after by his sister. Dr Bronson is helping Matt to recover his memories but Matt is starting to have his doubts about the people who’re meant to be helping him.

Recurring dreams of dead bodies and bloodied knives are haunting Matt, and while some memories are starting to return, even these are problematic. He starts to remember a brother, but that doesn’t help, as he’s not meant to have one, according to his sister, Jane.

Then Matt’s past comes calling, complete with guns and violence, but he has utterly no idea why he’s being hunted. To survive he has to rely on his instincts. Instincts he doesn’t even know how he even comes to be in possession of.

Simon Kernick excels at fast-paced thrillers, often with ordinary people thrust unwilling into extraordinary situations, which – for me, at least – is an almost-guaranteed winning formula. The Final Minute is cut from the same cloth, and certainly doesn’t disappoint. It gets off to one of Kernick’s characteristic explosive starts and doesn’t let up, as Matt turns to former maverick copper-turned-private investigator, Tina Boyd, a woman with an unerring ability to attract trouble with absolutely no effort whatsoever.

Tina, a recurring character in Kernick’s books, has never been a favourite of mine, but The Final Minute turned that around very quickly. She’s stubborn, gutsy and a good person to have your back in a tight corner. She’s trying to help a father find his missing daughter, even though she’s sure the girl is dead, and she wants to know how Matt’s blood-stained dreams connect with her investigation.

This is an absolutely classic ‘chase’ scenario. The bad guys are relentless in their pursuit and the good guys are equally inventive in avoiding them, but the cat and mouse game can’t go on forever. The showdown is suitably explosive as Kernick’s latest adventure makes good on all its promises with his usual blend of action and intelligence. This is very definitely my kind of thriller.