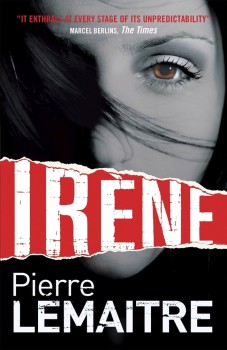 Commandant Camille Verhoeven is confronted by the savage murder of two young prostitutes. His investigations lead him to the belief that the circumstances of the murder replicate those described in a well-known crime novel.

A rather unusual word of warning needs to be given to anyone buying this book. You might notice that it forms part of a trilogy, one part of which - Alex - has already been published. What is not obvious is that Alex was the second part of the trilogy, not the first, and to read it before Irène is to lose much of the surprise and tension of the latter book. Why the publishers decided to do this is unclear but it is certainly an error and may well spoil the trilogy for many readers.

That would be a pity because Lemaitre has created in Camille Verhoeven a character likely to stand out in the genre of crime fiction. Much of his life has been spent in shame and embarrassment but at this stage in his successful police career he is blissfully happy. The reason for this is his beautiful wife, Irène, who is shortly to give him a child.

Whether she actually is as beautiful as Camille believes isn't important. The fact that he believes it is, and he believes it because she fell in love with and agreed to marry a man who throughout his life had been largely disregarded by women. Camille's mother had been a chain-smoker and suffered a foetal hypotrophy at Camille's birth, as a result of which he was never able to grow in the normal way, his adult height being 4ft 11”.

Camille is naturally very sensitive about this, but nevertheless has made a good career for himself. Having been to law school, he is now a successful and very respected police commandant. However, that successful career became complete only when Irène came on the scene. He still doesn't know why she loves him, still less why she agreed to marry him, but she did and Camille is not only deeply in love with her, but eternally grateful, particularly now that she is about to make him a father. The demands of his job and the unusual hours he has to keep would make most wives unhappy but Irene understands, knows that he loves her totally and she never complains.

Her patience and equanimity is put to the test, however, when Camille has to investigate the torture and murder of two young prostitutes. Their deaths were so sickening that Camille is utterly determined to find the perpetrator. He insists that his team be equally dedicated in spite of their very different characters. Louis, who comes from a wealthy family, is blond, handsome and self-confident; Maleval, charming but loose-living and spendthrift; and Armand, a loner who is almost paranoid in his miserliness, are all carefully presented so that they appear very real to us as they pursue a killer who appears to be insane. Camille's boss, the overweight, thrice-married and rather world-weary Commissaire Leguen, is sometimes critical of him, but he knows Camille's qualities and is generally content to let him have his way with the investigation.

Camille is above all a thinking man and it is entirely due to his intuition that the clue to the identity of the killer emerges. The investigators soon find out that, whilst the motive for the murder is not readily discernible, the actual methods employed by the killer are taken from and are exact copies of ones used in a well known crime fiction book – a discovery that leads to his being known as 'the Novelist.' Camille is so affected by the manner of the girls' deaths that it becomes a personal crusade. The tension is maintained by his receiving taunting letters from the murderer himself. It reaches its climax when the killer finally comes into the open, but knowing who it is and catching him before he commits another murder are very different things and the novel ends with a race against time when Camille finds out that he has another victim in mind.

The author's previously published novel, Alex, deservedly won the CWA International Dagger Award and this one is a worthy successor. It is crime fiction of the very highest class.